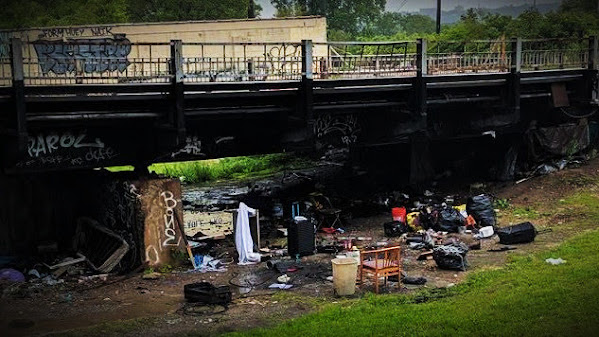 THE TRASHIEST PARTS OF KANSAS CITY ARE HOMELESS CAMPS!!!

We don't blame local trash problems on people dealing with addiction, poverty or mental health challenges for their horrific living conditions . . . Instead we look to local leaders and their MSM enablers for a solution to misguided policy which has allowed the situation to worsen.

Sadly, today the newspaper overlooks the problem in favor of dumping on the working-class . . .

The trash problem is more severe in urban areas, and MoDOT needs help particularly in Kansas City. Homeless people who leave belongings and trash behind contribute to the challenge, Melissa Black, a MoDOT spokeswoman said. Drivers of dump trucks and pickups who fail to properly cover their loads, allowing trash to blow out onto the road are also part of the problem . . .

But motorists and residents in general need to do their part to keep our streets and highways clean. Don’t litter, and report violators. Police and code enforcement officers should slap a substantial fine on anyone trashing Kansas City.

Why so trashy, Kansas City? Litter in our streets is no way to welcome new visitors

OPINION AND COMMENTARY Let's talk trash. No, not the ribbing we give our rival sports teams. That's fun. We're talking about the trash we see littering our streets and highways. That's not fun. In case you didn't know, tossing your trash on a Missouri highway could land you in jail for up to six months or cost you as much as $1,000 in fines.