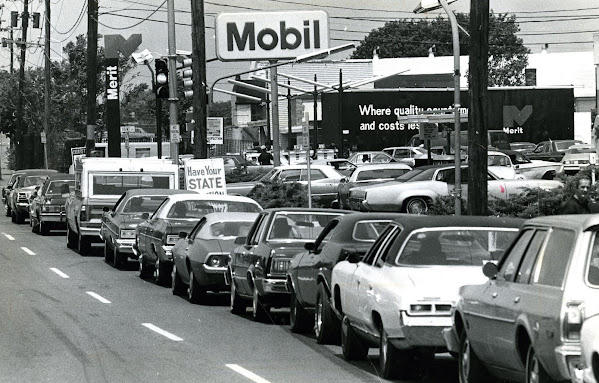 Allow us a bit of nostalgia to start #TBT . . . This week locals earned a discount by partaking in a time-honored recessionary tradition . . . The gas line.

Take a peek at this event that should remind us all of photos from the Carter days and a hint that American scarcity is taking hold . . .

Gas was $2.12 a gallon for only one hour at the FavTrip station at Bannister Road and Blue Ridge Boulevard. Originally it was $4.49.

Kansas City drivers line up for $2.12 gas for one hour only

KANSAS CITY, Mo. - Call it a sign of the times. Hundreds of drivers lined up for a big discount on gas Wednesday in Kansas City. Gas was $2.12 a gallon for only one hour at the FavTrip station at Bannister Road and Blue Ridge Boulevard. Originally it was $4.49.


VIDEO: Hundreds line up after KCMO gas station offers gas for $2.12 per gallon

KANSAS CITY, Mo. - A gas station in Kansas City, Missouri, wanted to provide a little bit of relief to drivers Wednesday. FavTrip, located at 9500 Blue Ridge Blvd., announced last night it would sell gas to motorists for $2.12 per gallon between 2 p.m. to 3 p.m. on Wednesday.

The president contrasted the bipartisan support for Ukraine with criticism of his administration on rising gas prices. His administration has faced mounting disapproval for near-record levels of inflation. "Are you saying that we would rather have lower gas prices in America and Putin's iron fist in Europe?" Biden said.

KANSAS CITY, MO - On Wednesday, President Joe Biden called on Congress to pass a gas tax holiday for the next three months. This comes as more drivers are expected to hit the road this summer. The move would save drivers just over 18 cents per gallon on gasoline, and 24 cents per gallon on diesel.

Americans are deeply unhappy about the price of gasoline, and for good reason. Every fill-up offers consumers sticker shock, and fuel prices are driving up overall inflation both directly and indirectly, as $5 per gallon of gas increases the cost of transporting almost everything.