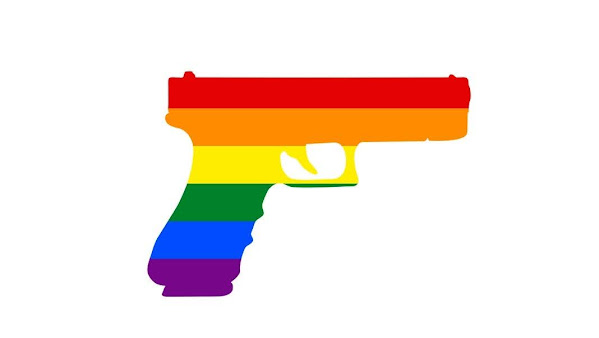 Don't worry about the gun featured above . . . Obviously, it doesn't shoot straight.

Meanwhile . . . As the newspaper attempts to play readers like they're arranging a demographic chess game . . . Our blog community loves inconvenient exceptions to every rule.

A LOT OF LESBIANS LOVE GUNS!!!

Anti-gun ethos among the LGBT community isn't universal . . . We hate to always remind our political pals that NO GROUP IS A MONOLITH . . . No matter how convenient that would be for people attempting to rule over us all.

KICK-ASS organizations like Pink Pistols remind us that people are infinitely more complicated than most of us would ever dare to understand.

We always thought that the point of honest "diversity" efforts were to lead everyone down the path to respecting people as individuals.

Meanwhile, here's a quick peek at the Kansas City Star using their paint by numbers approach to politics and everything else about the word . . .

The march is scheduled from 1 to 3 p.m. on Saturday in Kansas City’s Gillham Park. A march to Theis Park to meet up with supporters attending the city’s PrideFest will follow. This weekend’s rally follows mass killings that include 10 murdered on May 14 at a grocery store in Buffalo and 19 children and two teachers gunned down ten days later at Robb Elementary School in Uvalde, Texas.

The last youth-organized anti-gun rally drew about 6,000 people of all ages and backgrounds. I can’t help thinking that if people were so fed up at that time, then this weekend’s gathering should be even more momentous. Nothing could be more important than getting really loud about gun control if it helps to stop the mass murder of schoolchildren.

OPINION AND COMMENTARY What will it take to stop the mass murders of our children? When will our legislators listen to their cries and do something?