Today Midtown Kansas City was awash in progressive advocacy and it was hard to distinguish betwixt factions . . . Thankfully, the drag queens provided a welcomed and fabulous demarcation line.

Of course, Mayor Q was leading the party but we noticed quite a few important people in the crowd. 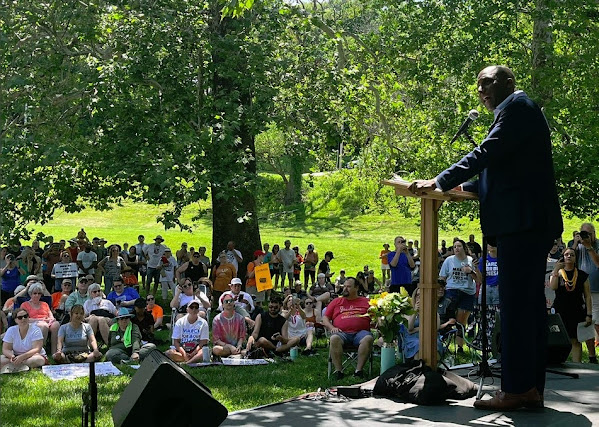 Mayor Q empahaised "intersectionality" in his speech and tweet . . .

"Kansas City is proud to join communities across our country today in coming together to say enough is enough and to demand sensible gun reform."

The Mayor's statement was defiant . . .

But here's the thing . . . Of course LGBT events outnumbered anti-gun marchers . . . From an outsider's perspective . . . It kinda seems like Democratic Party loyalists were "stealing the thunder" of LGBT party people . . .

But as always, most communities in KC are welcoming . . .

Our favorite shot from the Mayor's social media presence . . .

KANSAS CITY, MO (KCTV) --- The Kansas City Pride Parade was held Saturday. Members of the LGBTQ community and their allies marched from Westport to Theis Park in Kansas City. The parade is part of the 'Pride Fest' event, which got started on Friday and is happening all weekend.

KANSAS CITY, Mo. - The Kansas City community is celebrating LGBTQ Pride Month at the KC PrideFest Parade Saturday at 11 a.m. during PrideFest Weekend. The event celebrates the LGBTQ community and recognizes the history of those who are a part of it here in Kansas City.


'Something needs to change': March for Our Lives rally in Kansas City calls for gun reform

Eight-year-old Cecilia Cox gripped a cardboard sign that said in bold "Ban assault weapons, Ban high capacity magazines," as about 100 people gathered Saturday in Kansas City's Gillham Park. The protest was organized through the March for Our Lives campaign, which held rallies across the country in response to mass shootings that have killed dozens of people in recent weeks.

Meredith Bills and her friend, Joni Hall, found it hard to believe that they had to use the same old signs again on Saturday to help a crowd call for gun safety laws in response to yet another wave of mass shootings.