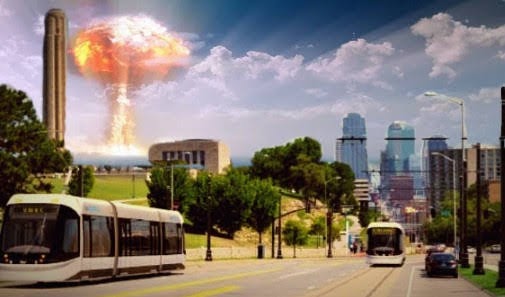 This morning we share a reality check for anybody closely watching real estate development in Kansas City.

THE REALLY SWANKY PROJECTS ARE POWERED BY TAXPAYER CASH!!!

The trend doesn't bode well for the "transformative" promises of the toy train and kinda makes the whole thing look like a ponzi scheme.

Caution at the outset of a recession won't stop local government from doubling down on giveaways at sites that other developers couldn't save . . . Check-it . . .

The plan calls the old hospital to be razed and replaced with a six-story apartment project with 385 units, the acquisition of 12 unsold condos, spending $1 million to certify the remaining 90 condos for occupancy, and renovate the 420-stall hospital garage.

Another 40,000 square-feet of space at the site could become a mixed-use plan, and NorthPoint also plans to work with the Rehabilitation Institute on a potential solution to activate its corner at 31st and Main . . .

START–Sustaining Transportation and Reinvesting Together–is intended to encourage and provide incentives for transit-oriented development projects. Revenue bonds are issued by the KCATA and repaid by the developers.

The RideKC Development board unanimously approved recommending the full KCATA board  issuing revenue bonds for both the NorthPoint and Milhaus projects.

The details of the duration and percentage of property tax abatements must still be negotiated, according to Frank White III, vice president of development for RideKC Development.

A $122 million residential project is in the works for the prominent, five-acre site of the old Trinity Lutheran Hospital complex by Penn Valley Park and near the planned streetcar stop at 31st and Main streets.