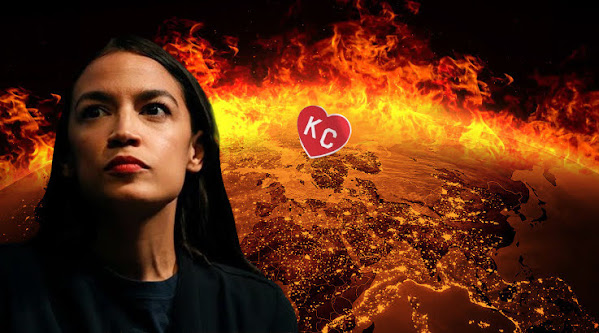 We don't have much of an opinion here because AOC warned us that we only have less than 12 years to live and must call ourselves "latex" in some strange purification ritual before the end.

Kansas City woke up to a hazier start then usual as dust from the Sahara Desert in Africa makes its way across the globe . . . The dust traveled over 7,000 miles west by trade winds into Florida, Texas then up to Kansas.

And then to this cowtown.

Dust from the Sahara Desert reaches all the way to Kansas

KANSAS CITY, Mo - "That dust layer on your car is part of the Sahara Desert," said the National Weather Service.

By Matt McGrath Environment correspondent, Bonn Climate talks in Bonn headed into their final day with rich nations accused of betraying the developing world. Poorer countries say that at COP26 they were promised that their key demand on loss and damage would be honoured this year.


Bjorn Lomborg: The left should stop 'scaring our kids witless' about climate change

Author Bjorn Lomborg joined " America's Newsroom" to discuss Big Tech companies acting to help the Biden administration by stifling debate on climate change. The president of the Copenhagen Consensus Center responded Wednesday to a piece by the Wall Street Editorial Board calling out White House national climate adviser Gina McCarthy for wanting to "censor content on the costs of a force-fed green energy transition."

New data has revealed extraordinary rates of global heating in the Arctic, up to seven times faster than the global average. The heating is occurring in the North Barents Sea, a region where fast rising temperatures are suspected to trigger increases in extreme weather in North America, Europe and Asia.

Georgia Republican Representative Marjorie Taylor Greene claimed on Monday that global warming was healthy for people. While speaking on the conservative Right Side Broadcasting Network (RSBN), alongside host Brian Glenn, Greene argued in favor of global warming. The video clip has also gone viral on Twitter and has been viewed over 140,000 times and was shared by commentator Ron Filipkowski.


A sighting reveals extinction and climate change in a single image

subscribe to Short Wave podcast Alaska's Koyukuk River was the site of an interesting discovery. During a float down the river, a group of University of Virginia professors spotted a woolly mammoth tusk along the riverbank. Adrienne Ghaly, a postdoc in Environmental Humanities, was able to document the moment in a photograph.

By the end of this week, parts of the UK will bake in temperatures of up to 34C, far hotter than normal June weather - but is climate change behind the soaring temperatures?

The sun flexed its considerable magnetic muscles today (June 13), and two solar spacecraft captured the show on video. Earth's star unleashed a long-duration solar flare early this morning, blasting high-energy radiation into space for about three hours. NASA's Solar Dynamics Observatory (SDO), which has been studying the sun from Earth orbit since 2010, observed the dramatic event in multiple wavelengths.