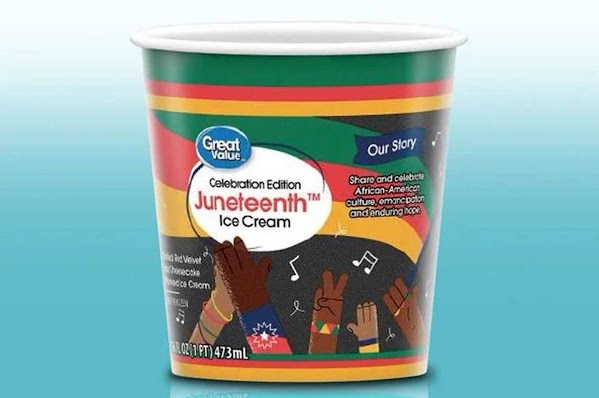 Recently, Walmart was smacked in public over ice cream celebration of an African-American holiday.

"Juneteenth was never meant to be about ice cream flavors, overpriced corny merchandise, and Juneteenth T-shirts . . .

"Instead of allowing it to be commodified into something that reeks of the same greedy, money-grubbing, dehumanizing spirit that informed our initial enslavement; this time around, we must not allow our day to become sanitized or fail to remember its true purpose. And the white folks should just be allies and leave our space to it’s peace!"

Don't get it twisted . . . TKC actually likes this post because it offers insight into how a holiday becomes commercialized.

This blogger is old enough to remember when the public ignored Cinco De Mayo and now it's a holiday that EVERYONE loves because tacos & beer are an easy sell.

Old school Irish neighbors once chided us that there's not much St. Paddy's Day celebration in Ireland.

Ireland parties on St. Paddy's just as hard as everyone else.

If Juneteenth is successful, it's doomed to become just another day to get sloshed and overeat like very other occasion.

If not . . . The holiday will be doomed to be ignored and ultimately forgotten . . .

Like Labor Day - Did you know KC proudly boasted of one of the biggest Labor Day parades in the nation???

Juneteenth has gained considerable prominence in the years following George Floyd's murder which swept the United States in what some might call a "racial reckoning" Despite its recent popularity, it's important that we have a conversation about what the holiday is, what it isn't, and how we can stay true to the power it holds.