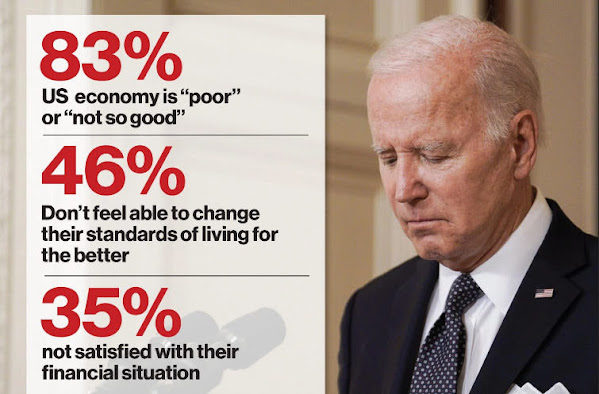 Critics of Prez Biden's economy aren't "ultra-MAGA" and not all of us will vote for Prez Trump or try another panty raid on the Capitol building.

In fact, a great deal of the rebuke is simply based on the White House mishandling of monetary policy.

Sadly, so many of us would rather slap fight about culture war than admit that macroeconomics is difficult to understand and the Prez hasn't FAILED to provide leadership on this front.

Luckily . . . Most voters know that they don't like how things are going so far:

After buying the historic Platte County general store in late 2019, he persisted through the pandemic despite numerous challenges. Now, as the pandemic wanes, inflation is making it more costly to fill the shelves.

“You know, you raise the price of gas, so now to get this jar of jelly or to get a bottle of milk or whatever you're selling in your store, the price goes up because you have to put it on a truck,” he said.

Inflation is also causing customers to cut back.

“So they're not traveling out like they were, they’re not spending that disposable income that they used to have,” he said. “It’s just not going into small business.”

After months of grappling with the difficult decision, he made the call to close. “It’s brutal, I mean, there's a lot of history here,” he said. “You just have to, at one point, pull the plug and say enough is enough. Retail brick and mortar mom and pops, it's tough. It's really tough.”

One of the oldest businesses in Platte County is closing its doors. KMBC 9 spoke with the current owner about what led to the difficult decision to close, and his plans for the future. Walking through the doors of the Farley Mercantile is like stepping back in time to the 1900s, but the reality of 2022 has dealt a devastating blow.