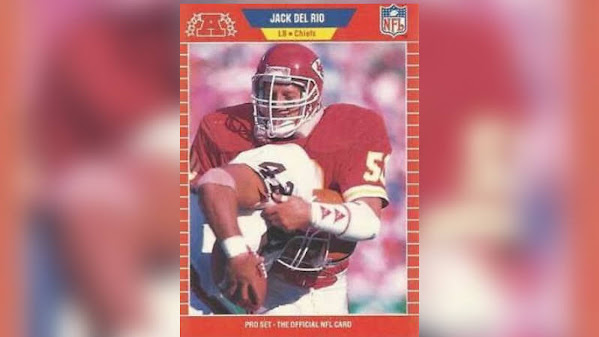 The local connection . . . During one of the worst epochs for the Chiefs, he was a standout linebacker and a crowd favorite. He even smacked down Super Bowl legend Otis Taylor during an NFL lockout in a dumb-ass case of mistaken identity.

Apropos for #TBT . . . Long, long ago he was one of TKC's childhood heroes. Somewhere in this basement I think I have his autograph.

This week his comments about "the insurrection" earned rebuke and an inevitable apology.

In a statement released hours later on Twitter, Del Rio walked back portions of his comments, apologizing for referring to the insurrection as a "dust-up."

"Referencing that situation as a dust-up was irresponsible and negligent and I am sorry," the coach said.

Del Rio went on to say he supports all forms of peaceful protests, but condemns community violence.

"I stand by my comments condemning violence in communities across the country," he tweeted. "I say that while also expressing my support as an American citizen for peaceful protest in our country. I have fully supported all peaceful protests in America. I love, respect, and support all my fellow coaches, players, and staff that I work with and respect their views and opinions."

Jack Del Rio defended his tweets about the upcoming Jan. 6 congressional hearings and pondered why there's not similar energy devoted to the "riots" in the summer of 2020 as there is to what he termed a "dust-up" at the U.S. Capitol.

In a statement later released on Twitter, Jack Del Rio apologized for calling it a "dust-up" saying that was "irresponsible and negligent" on his part. ASHBURN, Va. - The Washington Commanders defensive coordinator is defending one of his recent tweets drawing comparisons between racial justice protests in the summer of 2020 and the Capitol riot in 2021.