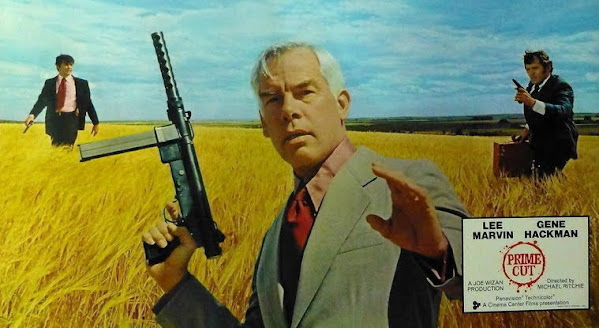 50 years ago movies actually tried to say something about our society.

Since that time . . . Video games & pr0n pretty much killed the American urge for artistic expression.

Still . . . We wanted to share a worthwhile old school movie review that name checks our cowtown by way of an old school neo-noir lost classic . . .

"The day after Prime Cut debuted in Kansas City on June 16, 1972, five operatives of Nixon’s Whitehouse were arrested for burglarising the offices of the Democratic National Committee and the corruption and sleaze of his presidency would soon be on open display for the world to see."

The Story of Lee Marvin, Gene Hackman, and Quite Possibly the Strangest American Crime Film of the 1970s

Want to talk about one of the strangest, if not strangest American crime film to emerge in the first half of the 1970s? Then, let's talk about Michael Ritchie's neo-noir as it turns fifty this year.