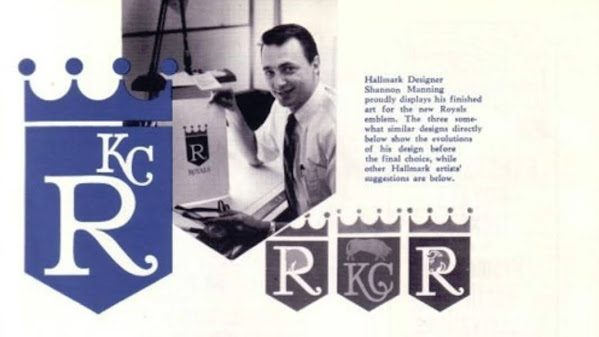 Pharmaceutical executive Ewing Kauffman won the bidding for the new Kansas City team. He conducted a contest to determine the best and most appropriate name for the new franchise.

Sanford Porte from Overland Park, Kansas submitted the name Royals, in recognition of Missouri's billion-dollar livestock industry. His suggestion was that the American Royal best exemplified Kansas City through its pageantry and parade, so the new team should be named the Royals.

The name was selected out of 17,000 submissions and the Royals Board voted 6–1 to adopt the name. The one dissenting vote was Mr Kauffman's. He eventually changed his mind after the name grew on him. (Some sources say it was in honor of the Kansas City Monarchs, a Negro leagues team.)

The team's logo, a crown atop a shield with the letters "KC" inside the shield, was created by Shannon Manning, an artist at Hallmark Cards, based in Kansas City.

Even better, a reader sent a shot of the iconic winning name . . . 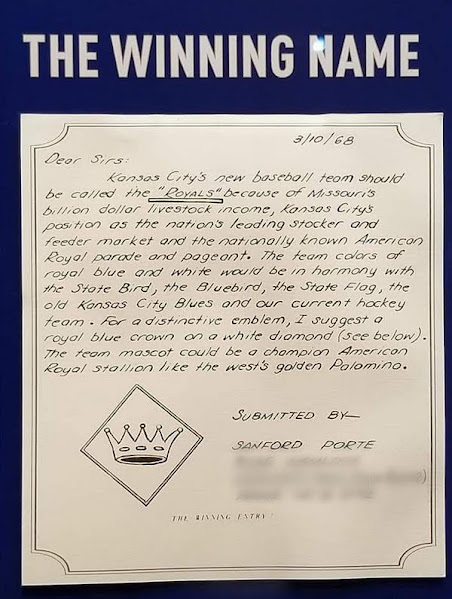 And all of this is much nicer than the team's current situation as the flex for a downtown stadium with one of the worst records in baseball . . .

Remember when Dayton Moore disregarded how Daniel Lynch is underachieving and Zach Greinke can't strike anyone out and Carlos Hernandez was a dumpster fire and Kris Bubic's ERA is almost 10 by being all "Hey now, you better give Cal Eldred credit for Brad Keller!" So, about that.