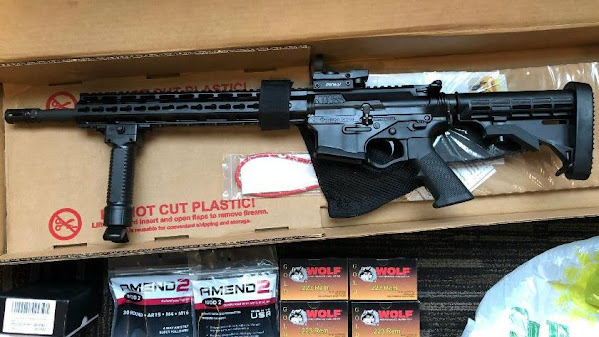 Every time locals complain about police . . . TKC can't help but to think that it could be MUCH, MUCH worse.

BELTON PO-PO CONFRONT A REALITY CHECK AND STOP PLANS FOR RAFFLING OFF A BIG-ASS GUN!!!

Some TKC readers don't think we should call them "assault weapons" and of course we think the "weapons of war" tag is just political hype . . . Still, there's no denying that this kind of snarky gun love is a bad look right now.

To be fair . . . They probably had a cooler AR-15 than the garbage featured in our top photo.

KANSAS CITY, Mo. - The Belton Police Athletic Association is no longer raffling off an AR-15 as part of its fundraiser benefiting the DARE program in the Belton School District. A spokesperson for the association said its been a sponsor in the area's DARE program for the last 30 years.

The Belton Police Athletic Association has canceled a planned AR-15 gun raffle for a charity event designed to raise money for the D.A.R.E program. The police association said in a statement Wednesday that it would cancel the rifle raffle in light of the recent mass shooting across the United State.