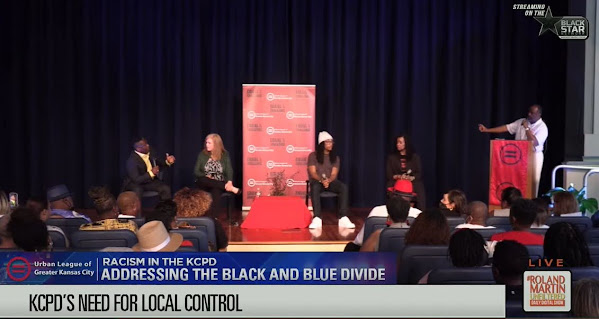 This conversation should've enjoyed more play in the local media but didn't garner a noticeable level of attention given that appearance of a nationally recognized news talker.

Here's the story for those who haven't seen it already . . .

“Racism in the KCPD: Addressing the Black and Blue Divide.” An event held by the Urban League of Greater Kansas City. It was hosted by Roland Martin who has a live program with a national platform. He focuses on topics of news and politics specifically for a Black audience.

What was clear from the panel and audience was they believe racism takes many forms. From violence against residents, solving homicides, and equity within the department. Gwen Grant, the CEO of the Urban League of Greater Kansas City was pleased with the turnout.

“We feel that this town hall was a great opportunity to bring our community together to amplify the voices of concern around public safety and the racism in the Kansas City Police Department,” Grant said.

KANSAS CITY, Mo. - Allegations of racism within the Kansas City, Missouri Police Department was the topic of discussion at a town hall Thursday night. Community leaders, advocates, and families affected by violent crime came out to have their voices heard in the conversation. "Racism in the KCPD: Addressing the Black and Blue Divide."

Even better . . . Without having to pay admission or make a donation . . . We share the live feed for those who remain curious . . .