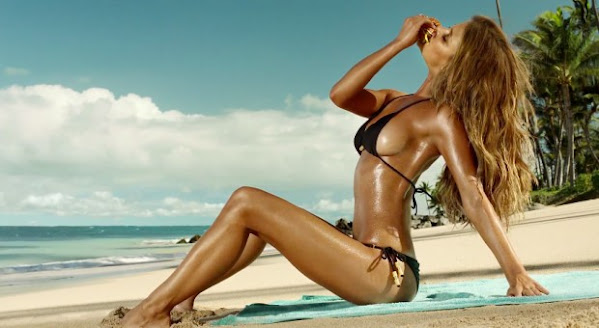 We notice that a great many local activists are sharing this "science" about warm temperatures in the urban core.

Skeptics might consider this a mirage that conforms with an agenda in much the same way the hottie Nina Agdal probably never REALLY ate a cheeseburger in a tropical paradise.

Check the data that, undoubtedly, argues that the sun is nearly as racist as your SUV . . . Check-it . . .

Last summer UMKC collected data for a nationwide study on urban climates, finding that some neighborhoods in Kansas City were as much as 10 degrees hotter than the rest of the city. The national study surveyed 60 cities, and rated KC as the seventh worst. The survey also noted that households with lower incomes were the most impacted.

KANSAS CITY, Mo. (KCTV) - City leaders and area environmental groups have been studying the effects of "heat islands" and how to mitigate them. Urban heat islands are warm pockets of air that form in concrete-heavy city environments that lack shade or green spaces.