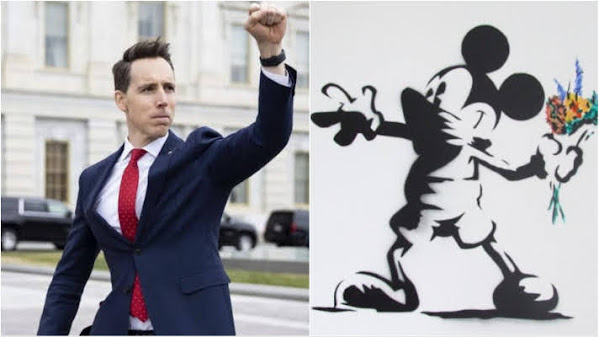 Close readers will have to ask local developer Butch Rigby about the specifics . . . Because TKC doesn't really care . . .

The world's richest rodent was pretty much born in Kansas City.

This is a fun fact that makes us forget that Walt Disney had a crush on Hitler's favorite movie-maker and wanted to restart her career in Hollywood.

Check this worthwhile Missouri flex against the Disney empire . . .

"Senator Hawley introduced the Copyright Clause Restoration Act, a brief three-page bill that would have serious implications for some corporate-held copyrights if enacted. Under current law, companies like Disney hold their copyrights for created works for 95 years after publication or 120 years after creation, whichever is shorter. Hawley’s bill would chop that period down to a maximum of 54 years for new works. As The Verge’s Sarah Jeong noted when discussing the bill, that number appears to be taken from the Copyright Act of 1909."

Sen. Josh Hawley (R-Mo.) is looking to further escalate Republicans' war with Disney. The Republican senator has introduced a bill that would limit new copyright protections to 56 years, a change he said would be "retroactive for the biggest entertainment companies" like "woke" Disney.

When we last checked in on Ron DeSantis's war against Disney, wherein the Florida governor had vengefully dissolved the company's special district status as retribution for its decision to speak out against his bigoted " Don't Say Gay" law, that special district, Reedy Creek, had informed DeSantis that, actually, he didn't have the power to do jack shit until paying off $1 billion in bond debt first.

First and foremost, Hawley's bill has serious constitutional issues. Congress is free to lengthen or shorten copyright protection to its heart's content, and there has been plenty of good-faith criticism of the post-1998 protections. Disney, funnily enough, played such a significant role in lobbying for that law's passage that it became known as the Mickey Mouse Protection Act.

Sen. Josh Hawley introduced a bill on Tuesday that aims to revoke Disney 's copyrights, as Republicans are seeking to outdo each other in attacking the "woke" corporation. Hawley's bill would dramatically rewrite U.S. copyright law, shortening the total term available to all copyright holders going forward by several decades.