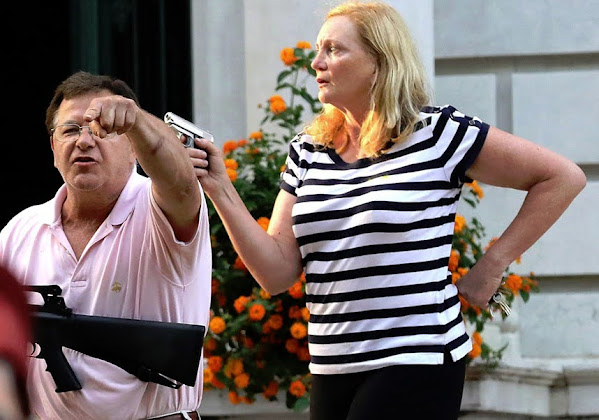 Allow us a moment to catch up with Missouri's most repellent couple . . . Don't get it twisted, few pro-gun advocates have embraced them not only because of their poor form but also because brandishing guns for social media stardom isn't really part of 2nd Amendment advocacy.

Here's an update from a progressive news outlet who might or might not been spoon-fed this legal tidbit from Democratic Party contacts who are still hoping to win the midterms by recycling the 2020 news cycle . . .

Earlier this year, the court indefinitely suspended the McCloskeys’ law licenses but stayed their suspensions and placed them on probation for a year. As a condition of their probation, they are required to provide 100 hours of pro bono legal services to organizations that provide free legal services for poor or indigent Missouri residents.

In March, the couple asked Missouri’s Office of Chief Disciplinary Counsel to approve Project Veritas as such an organization, but the office turned down their request. The office said that Project Veritas “does not provide legal services without charge to or on behalf of poor or indigent Missouri residents.”

The McCloskeys then sought approval from the Missouri Supreme Court, arguing that the conduct for which they were punished, namely waving guns at peaceful protesters, “did not relate to conduct that targeted or caused particular harm to poor or indigent persons.”

But the court on Wednesday also turned down their request, finding that Project Veritas was not an “approved legal assistance organization” under the Missouri Supreme Court rule defining such organizations in Missouri.

The Missouri Supreme Court has rejected the request of Mark and Patricia McCloskey, the St. Louis lawyers who brandished guns at Black Lives Matter protesters in 2020, to provide pro bono legal services to Project Veritas, a right-wing media group, as a condition of their probation.