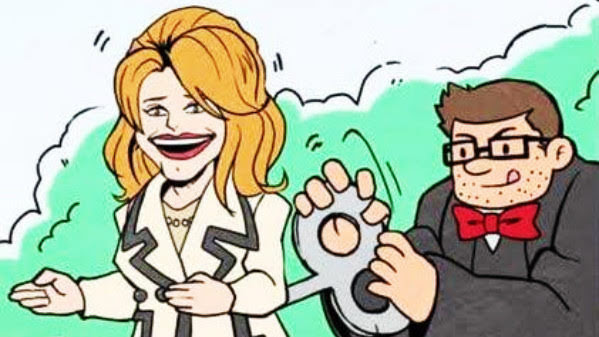 This afternoon, politically engaged denizens should be entertained by the antics of a federal judge's wife making the most of her free time by imposing stringent environmental rules on the plebs.

Council lady Andrea Bough is the worst joke in Kansas City politics. From her pricey fashion statements at community meetings to her out-of-touch politics cribbed from the notes of her hubby — Her tenure is neither progressive nor equitable; she mostly serves as a reminder that power players with a lot of money still control Kansas City government.

In four years she has accomplished nothing and now desperately works on flimsy legislation in order to pad her resume as election time looms.

I don't care if writing posts like this risks a trip to Guantanamo Bay given her EPIC connections.

It's worth it just to point out the truth . . . Council Lady Andrea Bough works in the company of smart and accomplished women who have fought diligently to stay relevant at the municipal level. Meanwhile, Andrea Bough doesn't belong on council and she's there because she's married to somebody important . . . Her career is a disservice to the principles which the Democratic Party claims to uphold and she's an insult to those of us who admire women who have actually earned their careers.

Also, just so we can write-off this screed as catty gossip blog good times . . . Everybody knows that pearls are out of style but somebody (Eric Bunch) forgot to tell the council lady.

Here's your invitation to the eco-crackdown party that's already underway . . .

Councilwoman Andrea Bough and City staff will host a Public Information and Input Session on the proposed adoption of the new energy efficient building code (the IECC 2021), ordinance 220364 today, Wednesday, May 25 at 4 p.m., or when Neighborhood, Planning, & Development committee concludes.

Staff presentation on proposed updates to the building code, how the code interacts with the proposed climate change plan, and an opportunity for interested parties to give input.

The session is open to all interested parties. The City Council of Kansas City has previously expressed goals of reducing greenhouse gas emissions and to become climate neutral by 2040, in order to protect the health and welfare of our residents.

The City is currently updating its Climate Protection and Resiliency Plan to realize those goals. Adoption of a new energy efficient building code that sets minimum energy efficiency requirements will help reduce carbon emissions and provide healthier and more affordable places for our citizens to live, work, and play.

Councilwoman Andrea Bough and City staff will host a Public Information and Input Session on the proposed adoption of the new energy efficient building code (the IECC 2021), ordinance 220364 today, Wednesday, May 25 at 4 p.m., or when Neighborhood, Planning, & Development committee concludes.