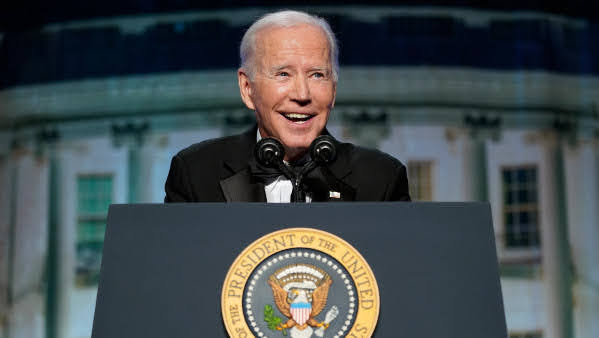 Sorry, trolling strangers and elected leaders via social media doesn't count as a sense of humor . . . Even if it's a great deal of fun.

We joke at everyone's expense on this blog but can't help but notice that people seem soooooooo serious nowadays and quite a few denizens of the discourse have lost their ability to laugh at the absurdity of it all.

Again, our right-wing pals mistakenly think that online stalking or cleverly phrased death threats count as a form of humor and progressive "satire" always seems to overlook the banality of Democratic Party leaders.

The president took the opportunity to test out his comedic chops, making light of the criticism he has faced in his 15 months in office while taking aim at his predecessor, the Republican Party and the members of the press.

“I’m really excited to be here tonight with the only group of Americans with a lower approval rating than I have,” Biden said to the Hilton ballroom filled with members of the media.

WASHINGTON (AP) - Much of Washington is ready to party like it's 2019, before the coronavirus, when the biggest risk at the annual White House press corps gala was more likely to be jokes that ruffled too many political feathers.

President Biden spoke at the first White House Correspondents' Dinner since 2019 Saturday evening, poking fun at his low approval ratings and the Republican "Let's Go Brandon" slogan targeting him. Some of his jokes got more laughs than others.

The last time a president and a comedian shared the stage at the White House Correspondents' Dinner was six long years ago, when Larry Wilmore ended his set with a deeply personal send-off to Barack Obama. A lot has changed in both politics and comedy since then.

The two attended the White House Correspondents' Dinner together on Saturday in Washington, D.C., making sure to stop by the red carpet. The Saturday Night Live actor joined the reality star as her guest at the dinner, which celebrates the work of White House journalists and the media.

Journalists and celebs like Kim Kardashian and Pete Davidson hit the red carpet for the 2022 White House Correspondents' Dinner on April 30.