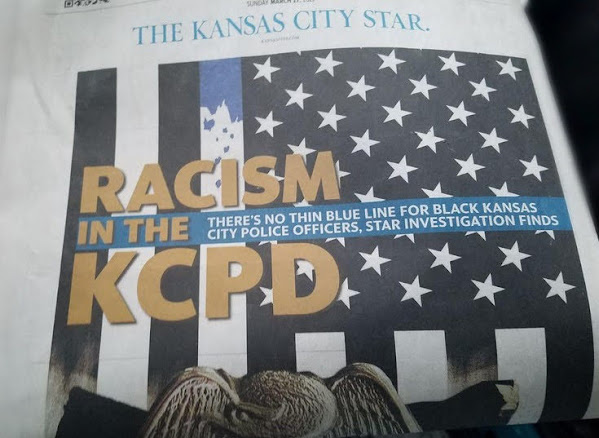 Here's something that locals need to consider . . .

With lower circulation, hedge fund ownership and printing in Iowa . . .

WHY SHOULD THE KANSAS CITY STAR HAVE ANY SAY OVER THE NEXT CHIEF OF POLICE?!?!

Sadly, local TV news doesn't really cover this kind of political intrigue and social media typically tamps down any opinions that are too controversial.

The Kansas City Star has been so undeniably anti-police over the past two years that any suggestion or reporting from the organization deserves a great deal of skepticism.

As always, on this blog we want readers to be skeptical about EVERYTHING.

The names that have emerged so far as potential local candidates include:

- Maj. Dan Haley, a commander for the department’s research and development division;

- Floyd Mitchell, a former KCPD major who is chief in Lubbock, Texas.

None of the potential candidates would confirm with The Star that they plan to seek the permanent job. It is unknown what candidates the board could add from a nationwide search. However, many of the possible local candidates have attended a variety of community events, including a series of recent listening sessions that were sponsored by the Greater Kansas City Chamber of Commerce and other civic, community and business organizations.

Those gatherings were aimed at getting public feedback on what qualities residents want in their next chief. The findings are scheduled to be released at 9:30 a.m. Tuesday during the monthly police board meeting at the downtown Kansas City Police Department headquarters.

Kansas City may be a long way from selecting its next police chief, but several potential candidates with strong ties to the community offer an array of diverse backgrounds and law enforcement experiences. Many of them are seeking to raise their public profiles by popping up at various public meetings, neighborhood park cleanups and food giveaways.