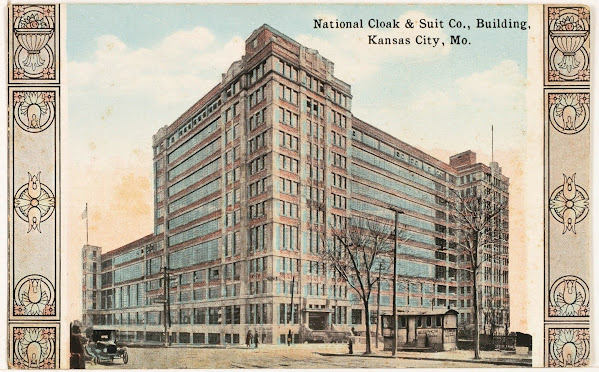 An iconic Kansas City structure might soon house affluent hipsters . . . And a few dregs on the lower levels.

Of course taxpayer help will be required.

"The 650,000-square-foot National Cloak building was completed in 1919 and once housed the largest mail-order apparel business in the eastern United States, employing 2,000 people. Its interior floors total 14 acres of floor space."

We don't forget that Northeast News reported this development first . . .

"Early in 2021, plans were announced by the Arnold Development Group to transition the storage building on the postcard into 352 residential units with retail space on the first floor."

Arnold wants to convert the historic National Cloak and Suit Company building at 5401 Independence Ave. into 352 apartments at an estimated cost of $120 million. The majority would be affordable to households earning 60% or less of area median income (AMI).

Depending on inflation . . . That might be a couple of grand that few neighbors in the area would be able to afford.

Of course there's an official press release report copied & pasted by a hack newsie who is friends with the other cowtown "elite" (lulz) journalists . . .

Fresh from building a super-green apartment complex from scratch, developer Jonathan Arnold is tackling a very different project, renovating a massive, century-old building into affordable housing. Arnold wants to convert the historic National Cloak and Suit Company building at 5401 Independence Ave. into 352 apartments at an estimated cost of $120 million.