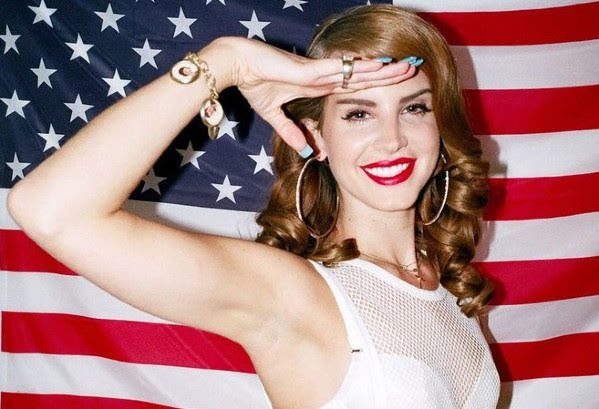 Sorry for the somewhat trick question in the post title considering that both ideologies are equally racist.

To start and because I don't want this post to go on too long . . .

The lead photo features pop diva Lana Del Ray - Her real name is Elizabeth Woolridge Grant but she does her makeup and hair like a chola and employs the Spanish sounding stage name to make herself seem more interesting. Some of her songs are kinda dark but still quite good and her career speaks to a much more optimistic understanding of the constantly evolving cultural landscape.

Lesser intellects have been playing the culture war blame game in the aftermath of a terrorist hate crime killing spree in Buffalo, New York.

Here's something to consider for locals who might fall victim to mainstream news spin . . .

There's no such thing as "The Great Replacement Theory" in any real context beyond an online trolling tactic or a garbage idea that hack pundits use in between commercials for boner pills.

More to the point and the reason why we wrote this post . . .

IF THE REPLACEMENT THEORY WAS REAL: THEN MIDDLE-CLASS WHITE PEOPLE WOULD'VE STOPPED HIRING SO MANY ILLEGAL MEXICANS LONG AGO!!!

Most suburbanites would GLADLY replace all of their neighbors AND learn some Spanish in order to get a better price on a new roof.

As always, we remind readers that the only color that REALLY matters to Americans is green.

The reality is that NOBODY is getting replaced and the world isn't growing more crowded . . . It's only corporations hording wealth and rigging economic systems who propagate divisive & miserable ideas in order to keep the plebs distracted and at each other's throats.

In Buffalo, NY and every other part of the world . . . Crazy people commit murder sprees for all kinds of insane reasons and the deranged ideologies adopted by people with mental health issues only benefit craven hacks who capitalize upon them.

This leads us to identity politics . . . Our right-wing pals would have us believe that racially divisive spin is only a tactic of progressives but the fact is that using demographics to divide and conquer populations in order to accomplish a political goal is a tried & true tactic of both the Democratic Party & Republicans.

To be fair . . . Mere hours after the shooting the Kansas City Mayor Q took to social media in order to spread divisive rhetoric and highlight racial charged talking points angle over the horrific human tragedy that threatens every American.

Now, a quick consideration of the big picture . . .

In the early 60s the U.S. South was a Democratic Party stronghold but the GOP "Southern Strategy" converted those voters over to Republicans by way of racially charged rhetoric.

There are more examples like Prez George Bush's Willie Horton advert and Prez Trump's Mexican bashing . . . Even if that "bad hombres" line was HILARIOUS.

And again . . . To be fair, the Democratic Party exposes racial divisions to their own advantage all of the time. There are too many examples on MSNBC & CNN every day to name but during this latest election it was nice to watch Prez Biden get smacked down for his "you ain't Black" entitlement argumentation.

In the end it's incredibly difficult to rely on solely on identity politics for political leverage i.e. fool all of the people all of the time.

Right now the Black Lives Matter organization is imploding amid scrutiny of their tax records.

Meanwhile, white supremacy is a failed ideology that's only actively embraced by movie villains and a few lesser residents of trailer parks. Most conservatives and any mainstream denizen of the discourse rabidly rejects racism despite constant allegations of as much from political opponents.

Still, the racially charged and desperate search to ascribe culpability to someone besides the shooter following the Buffalo, N.Y. massacre persists in order for all manner of manipulative opportunists politicos to use the tragedy to their advantage.

Who are the victims of the Buffalo shooting

Her brother, Warren Massey, said he dropped off Katherine at the grocery store shortly before the shooting began. He said that he usually stayed with Katherine but that she told him to come back and pick her up. "I never thought that was the last time I would see her," he said.

Social media posts by the 18-year-old White man suspected of shooting and killing 10 people at a Buffalo supermarket Saturday reveal he had been planning his attack for months.


Tucker Carlson fires back at politicians exploiting Buffalo massacre to score political points: 'No behavior worse than this'

Democrats' focus on the racist replacement theory, which casts minorities as an existential threat to white people, signals a shift in how they respond to gun violence.

Events such as the one in Buffalo require a serious response, but there is nobody around to provide one, at least not in elected office.


How the 'Replacement' theory went mainstream on the political right

subscribe to The NPR Politics Podcast podcast Following the shooting in Buffalo, N.Y., focus has been trained on the "Replacement" theory, also known as "White Replacement" theory. That's because a white man, who killed 10 Black people and injured three others, posted a 180-page document online that promulgated racist conspiracy theories often referred to as the "Great Replacement."

Biden called white supremacy a "poison" during remarks in Buffalo after a deadly weekend shooting. The president also condemned those who "profit" from spreading great replacement theory. Congressional Democrats have blamed Fox News and Republicans for the shooting. But Biden stopped short.