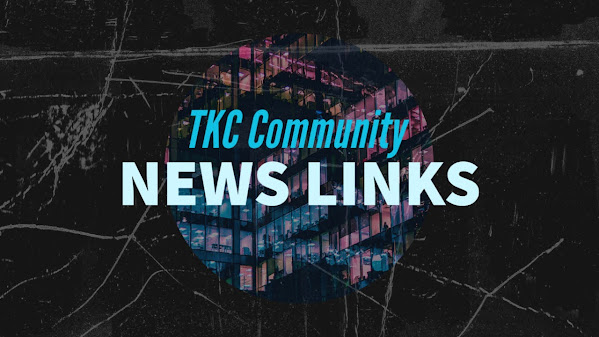 For close readers we offer this quick compilation of some of the links that deserve a peek from across the metro and around the world . . . This post provides a quick overview of community news, pop culture and top headlines.

Gas prices nationwide hit a record $4.37 a gallon, which is the highest since March.In Kansas, the state average is $3.96, according to AAA. In Missouri, it's $3.93. But those pennies add up, especially for business' bottom lines.Danny Belzer runs a carpet cleaning service out of his van.

KANSAS CITY, MO - Freedom Fire Urban Ministries rallied to pick up the pieces after a truck crashed through the church early Tuesday morning , leaving the building in ruin. "When I saw the truck it was a bit surreal to see an automobile sticking out of the building where you do church on Sundays," said Bruce McGregor, founder and president of Freedom Fire Urban Ministries.

Pro-life groups are going door to door, encouraging the passage of a constitutional amendment that would limit abortions in the state of Kansas.The initiative is called Value Them Both.The groups are giving out signs in favor of the amendment.

Three measures to legalize recreational marijuana in MO, but one seems more likely to succeed

KANSAS CITY, Mo. - Almost 182,000 Missourians have a medicinal cannabis card, and recreational could soon be on the horizon. Three measures that would legalize adult-use cannabis had a chance of moving forward this year, but only one seems likely to see the light of day.

Free tuition sounds too good to be true, but it's one way to attract more students to careers that are in high demand.That's what the Kansas Promise Scholarship Program is all about.Malerie Luttrell goes to Johnson County Community college. She's a mother of three making a career change.

Hailey Bieber shows off her toned abs in a crop top

Hailey Bieber looked her very best this week in a new Live In Levi's ad campaign for Levi's. The wife of Justin Bieber wore a white cropped tank top that she paired with an old, very worn-in pair of Levi's 501 jeans, which she has been a fan of for years.

President Biden said Tuesday that soaring inflation was "a real tough problem to solve" and warned it could get worse before it gets better - while offering no new ideas to stem rising prices. "It's really complicated. I'm not suggesting American people can't understand it.

He says Twitter's decision to ban the former US president was 'morally wrong and flat-out stupid'.

The bill passed 368 to 57. It will now go to the Senate and then to Mr. Biden's desk. Senate Majority Leader Chuck Schumer said ahead of the vote that the Senate will act on the aid package "as soon as possible."

Trump notches a loss in Nebraska as Herbster goes down in GOP gubernatorial primary: AP

Former President Donald Trump wasn't on the ballot in Nebraska's crowded and combative Republican gubernatorial primary. But the former president suffered a defeat, as Charles Herbster - the candidate he had endorsed and traveled to Nebraska to hold a rally on behalf of - came up short.


Mum Below The Ocean

Federal prosecutors contend that during a fishing trip in 2016, Nathan Carman, 28, murdered Linda Carman, sank his boat and was adrift at sea on a life raft for eight days before being rescued.

Russian President Vladimir Putin is preparing for a "prolonged conflict" in Ukraine, and could resort to drastic measures if the fighting doesn't go his way, according to Director of National Intelligence Avril Haines.


Snubbed South Of The Border

Mexican President Andres Manuel Lopez Obrador said Tuesday he would not attend the U.S.-hosted Summit of the Americas next month if all countries in the region were not invited, while Brazilian President Jair Bolsonaro is also likely to skip the meeting, sources told Reuters.

KANSAS CITY, Kan. - Sporting KC's late game surge was enough to pull out a win. SKC won 4-2 to FC Dallas in the Round of 32 of the Lamar Hunt U.S. Open Cup. After two first half goals for Dallas by Franco Jara and Eddie Munjoma, Nikola Vujnovic put Sporting on the board in the 61st minute.

The all-new Tom Cruise "Top Gun" sequel hits theaters on May 27.Union Station is starting to feel the need for speed. It will show the movie at its IMAX theater."For anyone who is a graduate of Top Gun, that always goes on your right shoulder," Kansas City pilot Jesse Reed said.

Cynthia Seymour has always loved making things with her hands. After studying economics at UMKC, Seymour even went into baking before dabbling in shoemaking. It wasn't until 2018 that she decided to move to Milan and study the craft of shoe pattern making and design.

OVERLAND PARK, Kan. - The Blue Valley Board of Education voted 4-3 Monday night to name Kaety Bowers the new vice president. Monday's meeting came after a special meeting on April 28 in which the board voted 5-2 to strip Jim McMullen of the vice president title.

Hide Transcript Show Transcript LOOK FOR A LINK TO REGISTER NOW AT KMBC.COM/COMMUNY. IT IS SO NICE TO BE I AN AIR-CONDITIONED STUDIO TODAY. IT IS HOT TODAY. BRYAN: AND IT WILL BE HOT FOR AT LEAST ANOTHER COUPLEUT B THEN THINGS WILL WANE A LITTLE FOR THE WEEKEND.