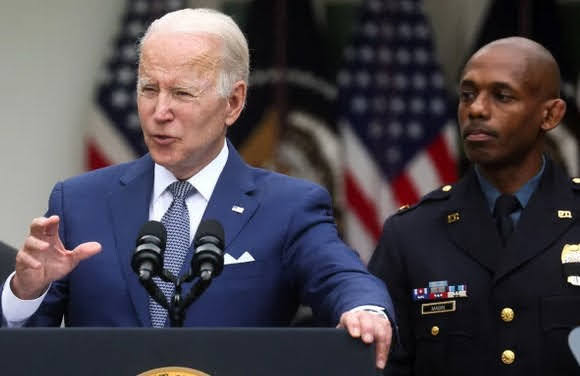 Most local media didn't notice this but we think it deserves attention . . .

Notice Kansas City's interim top cop standing right behind the Prez during Friday's word on more cash for police across the nation.

BEHIND THE SCENES THERE'S AN EFFORT TO DRAFT INTERIM CHIEF JOSEPH MABIN TO TAKE THE JOB PERMANENTLY!!!

Mayor Q was very loudly trying to get the new temp top cop to reconsider his stance against taking the job on their recent trip.

The law man has a great deal of support from inside the department and his promotion would limit the damage from an outsider social justice candidate.

We'll keep our eye on this story and, of course, link when MSM claims that they "reported" news we blogged weeks earlier.

Check TKC news gathering on a great many topics related to local crime . . . And, of course, attempting to finish with a bit of hope.

There is more money to help cut down on crime in Kansas City, Missouri. Mayor Quinton Lucas said the city is getting a $1.5 million federal grant. Public safety was the focus of Friday's meeting between the mayor and President Joe Biden in Washington.Biden said Kansas City is a model to follow.

Speaking to reporters on public safety Friday, President Biden said that critics of bail reform have over-exaggerated the fallout from it, namely the increasingly common occurrence of criminals being released and re-offending within a short time window.

KANSAS CITY, Mo. - The Kansas City, Kansas, Police Department is investigating an incident that occurred early Friday morning and left one juvenile and one adult with stab wounds. Officers were dispatched to the 2200 block of South 50th Street around 5 a.m. on reports of a stabbing.

A Kansas City man has been charged in connection with the death of a Chiefs fan who was hit while leaving Arrowhead stadium after a game in October.Jackson County Prosecutor Jean Peters Baker said Thomas J. Weyer, 19, was charged with leaving the scene of an accident, which is a Class-D felony.On Oct.

KANSAS CITY, Mo. - An arrest warrant is out for a 19-year-old Kansas City, Missouri, man accused of fleeing the scene of a deadly hit-and-run crash near Arrowhead Stadium. The widow of the pedestrian killed in that crash is also sharing her frustration over having to wait for an arrest, given that this crash happened while leaving Arrowhead seven months ago.

KANSAS CITY, Mo. (KCTV) - Charges have been filed after a Chiefs fan was struck and killed last year while leaving the parking lot of Arrowhead Stadium. A 19-year-old from Kansas City, Missouri, now faces felony charges but the wife of the victim said she feels like her husband's memory is being disrespected.

The former hospital respiratory therapist now charged in a patient's death in 2002 is heading back to Livingston County, Missouri.Jennifer Anne Hall appeared by video conference before a Johnson County, Kansas judge Friday afternoon after being arrested in Overland Park on an unrelated identity theft charge.Hall is charged in Livingston County with the death of 75-year-old Fern Franco when she was a patient at Hedrick Medical Center in Chillicothe, Missouri.Franco is one of nine people who died mysteriously in 2001 and 2002 at the hospital.

LEE'S SUMMIT, Mo. - The Jackson County Sheriff's Office has a new tool in its arsenal to protect its K-9 unit against deadly drugs. All three of the department's dogs now carry their own personal dose of Narcan, which is an antidote for opioid overdoses.