To set the tone for this "conversation" we found one of the few clever Internets arguments that inspires a chuckle . . . 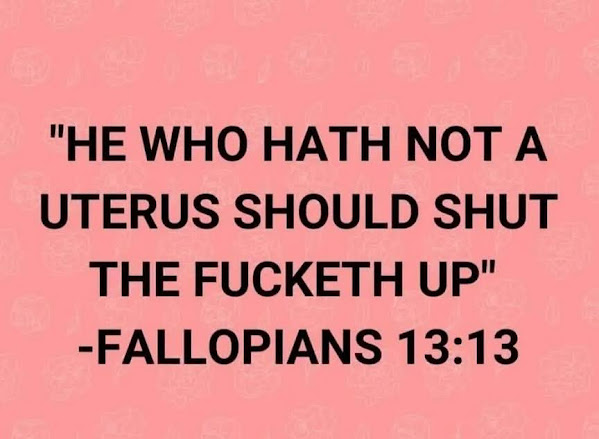 That's funny . . . And as we've noted often during amid this politically charged debate . . . . Locals seems to have lost any perspective in this discussion.

Here's one example of a recent protest that strangely seems to advocate more death for babies in the urban core . . .

"Organized by the Reale Justice Network – a group of Kansas City-based Black women, trans and non-binary community organizers – the Rally’s purpose was two–fold: to protest the Supreme Court’s impending deprival of human rights, and to center low-income, communities of color who will be impacted most by this action."

We'll ignore their hyperbolic reporting about the turnout for an abortion rally earlier this week. More importantly, whilst we don't doubt their sincerity . . . Their argument overlooks an important fact that is best explained by this passage . . .

"In many black communities, the abortion debate is inextricably tied to race in ways that white communities seldom confront. Social and economic disparities that are particularly challenging to African-Americans, from mass incarceration to maternal and infant mortality, are crucial parts of that discussion.

"The best way to reduce abortions, many black people both for and against the practice argue, is to address the difficult circumstances that lead so many black women to end their pregnancies. Abortions have dropped over the last 15 years among all racial groups. But black women continue to have the highest abortion rate at 27.1 per 1,000 women compared with 10 per 1,000 for white women, according to a study published in the American Journal of Public Health.

"Those seeking to outlaw abortion lament what they see as an undoing of the fabric of black families. They liken the high abortion rates among black women to a cultural genocide, and sometimes raise the specter of eugenics and population control when discussing abortion rights, as Justice Clarence Thomas of the Supreme Court did in a recent concurring opinion."

KANSAS CITY, MO - On May 3, over two hundred Kansas Citians gathered outside of Jackson County Courthouse to protest against the recently leaked draft opinion by the United States Supreme Court - which strongly indicated that the decades-long Roe v. Wade's decision will be overturned.

ST. LOUIS - As a pastor, Clinton Stancil counsels his black congregants that abortion is akin to the taking of innocent life. But as a civil rights activist, Mr. Stancil urges them to understand the social forces that prompt black women to have abortions at disproportionately high rates.