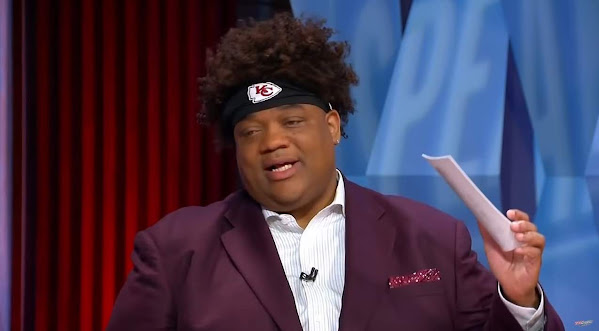 For those who haven't seen it yet . . . Here's the hot take from Big Sexy in the aftermath of American tragedy . . .

"Our culture has moved such a negative direction in the last decade, I'm not sure first responders would run up in the World Trade Towers today," he said. "Cultural rot has consequences. When you make heroes of people who contribute nothing and demonize those who risk everything."

He followed up this quick quote by doubling down and making even more bombastic statements.

Right now we ask our blog community to weigh in and provide links for context of a conversation that might only be marginally related to Kansas City but CERTAINLY resonates across the nation . . .

Jason Whitlock Trending For What He Said About School Shooting

Former sports columnist and current talking head Jason Whitlock made headlines this morning with a controversial message following a shooting at a Texas elementary school that left 19 children and two teachers dead. "Our culture has moved such a negative direction in the last decade, I'm not sure first responders would run up in the World Trade Towers today," he said.


What Jason Whitlock can teach us about white people, cops and America

Jason Whitlock (Screenshot/YouTube) Editor's note: The following article is an op-ed, and the views expressed are the author's own. Read more opinions on theGrio. The storyline for The Game of Thrones character Hodor will always be one of the most beautifully executed character arcs in television history.

JASON WHITLOCK (BLAZETV HOST): Cowardice. Fear and cowardice. Our culture is controlled by fear and cowardice. Masculinity, traditional male values, are under attack. There's -- it's not any mystery why young boys are confused, angry, confused about their identity, angry at the world.

Texas's top public safety official said officers on the scene failed to follow protocol at the Uvalde elementary school shooting, with officers standing in the hallway as children in the classroom called 911 as their classmates were killed.

Law enforcement in Uvalde, Texas is facing the ire of a grieving community as officers there admitted Friday that key decisions made during the time of the elementary school shooting were wrong. Fred Fletcher, retired Chattanooga police chief and former police commander in Austin, Texas, joins Williams Brangham to help us better understand some of the policing protocols used in school shootings.

Veteran sportscaster and CNN contributor Bob Costas railed against those defending the Second Amendment following the elementary school shooting earlier this week in Uvalde, Texas, calling their arguments "insane," and declaring that the Constitution was "not a suicide pact."

HOUSTON (AP) - One by one, they took the stage at the National Rifle Association's annual convention in Houston and denounced the massacre of 19 students and two teachers at an elementary school across the state. And one by one, they insisted that further restricting access to firearms was not the answer to preventing future tragedies.