Internets Lady Screaming After KCPD Shooting Might Be Lying?!?

NEWSFLASH: Somebody on the Internets was raving mad and yelling at the top of their lungs about a situation they described inaccurately.

REMEMBER THE INTERNETS LADY CLAIMED THE SHOOTING VICTIM WAS UNARMED??? SHE MIGHT HAVE BEEN LYING & HER SKETCHY STORY WENT VIRAL ACROSS THE GLOBE & UNQUESTIONED BY LOCAL MSM!!!

"The woman was shot after two KCPD officers approached a vehicle that matched the description of a vehicle stolen earlier that day in Kansas City, Kansas.

"Police recovered a handgun after the shooting.Missouri State Highway Patrol Sgt. Andy Bell told KSHB 41 News that he is certain the woman was holding the handgun during the series of events after reviewing body cam footage.

'"We know for a fact that she had a handgun in her hand," Bell said. Bell was not able to confirm the manner of which the woman was holding the weapon."The actions of how she was holding the gun, whether she was pointing it ... we're not prepared to say right now," he said."

The Kansas City Star and their pundits reject the report . . . 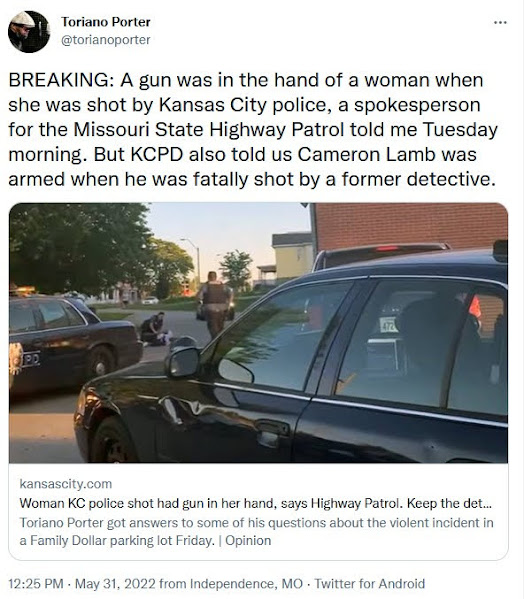 Only activists, hacks & spammers denied Cameron Lamb was carrying a gun. Some even imagined the gun was planted.

One of the more popular arguments was that he couldn't have fired it because of a hand injury.

In fact, the case is still under appeal and the decision was based on "reasonable search & probable cause" rules and didn't actually hinge on gunfire.

Sadly . . . Nowadays, columnists at the Star the aren't even required to use Google for basic fact checking.

Meanwhile, just as we predicted . . .

The latest Kansas City Police shooting is hopelessly mired in politics and racially-charged rhetoric rather than a consideration of the context & facts.

KANSAS CITY, Mo. - The Missouri State Highway Patrol said Tuesday that the woman who was shot by Kansas City, Missouri, police Friday was holding a handgun during the shooting. The woman was shot after two KCPD officers approached a vehicle that matched the description of a vehicle stolen earlier that day in Kansas City, Kansas.