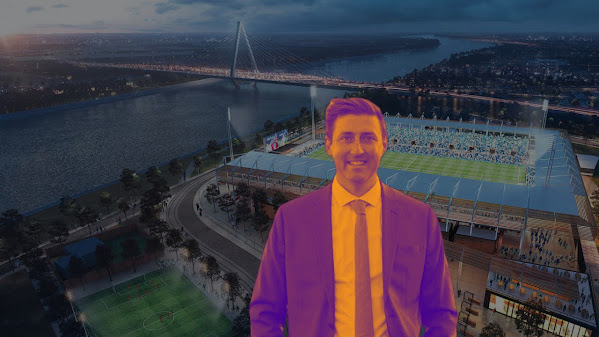 In one of the most stunningly craven quotes we've read all year, a Kansas City councilman reveals a remarkable lack of understanding about the political process which governs Missouri tax incentive policy.

His naiveté is even worse than flimsy arguments that tens of thousands of local fans will support women's soccer when all evidence seems to indicate the contrary.

Here's the word about a riverfront soccer stadium tax break switcheroo that has shocked political insiders from across the Show-Me State . . .

Councilman Eric Bunch, District 4, said he was “adamant” that the ordinance not include local tax incentives.

Bunch, who is sponsoring the measure, said he supports it because it’s not local tax dollars and it helps reinvest tax revenue back into Kansas City.

“For me, it was a win-win,” Bunch said. “We’re not doling out local incentives and we’re having the state come in and help us out.”

Bunch said he didn’t remember whether the team said the stadium would be “totally privately funded,” just that there was no intent to ask for local incentives.

“I’m not hung up on whether they said 100% private or not,” Bunch said. “I think that the story for me is that it’s an exciting thing and the state’s willing to invest in it and invest in Kansas City.”

First and foremost regarding this silly insight posted on a glorified newspaper blog this afternoon in response to double talk from the team's feeble "private financing" claims  . . . What stood out to TKC is the brazen shell game the council dude is playing.

Local incentives are, in fact, at stake given that Kansas City taxpayers also pay Missouri taxes and the team's request is to use their money to build the fanciful structure.

This might be a minor quibble over budget ownership given that INSIDERS were even more disgusted with the perspective of the councilman.

"Does Councilman Bunch or Mayor Lucas really think they can waltz into Jefferson City and ask for money after two years of beating up on the Republican legislature???"

"What they're trying to do is laughable . . . It only takes one State Senator to object and their scheme is busted. This is a plan that looks like it has been sketched on the back of matchbook. Councilman Bunch doesn't have a chance of getting these tax breaks passed and neither does Mayor Lucas."

What really stands out are insights about stakeholders . . .

"How is Councilman Bunch or Mayor Lucas going to create a partnership with other legislators who are also trying to get reelected . . . They're going to ask other districts to invest the money of their constituents without KC putting funds into the effort??? That's not just unlikely, it's insulting. Bunch has ruined any chances of getting a tax break deal with his approach. He seems to be counting on people not knowing how the process works . . . That might prove effective for some of his friends but not for colleagues who have also made it to Jeff City."

We have more to blog on the council dude but right now we merely wanted to share a tragic truism . . .

COUNCILMAN BUNCH IS EITHER IGNORANT ABOUT MISSOURI TAX INCENTIVE POLICY AND ITS PRACTICAL APPLICATION OR SO CYNICAL THAT HE DOESN'T THINK ANYBODY ELSE UNDERSTANDS HOW THE PROCESS WORKS!!!

A trusted insider sums it up perfectly . . .

"Between the Mayor and Councilman Bunch, I've never seen people so oblivious as to how local government functions . . ."