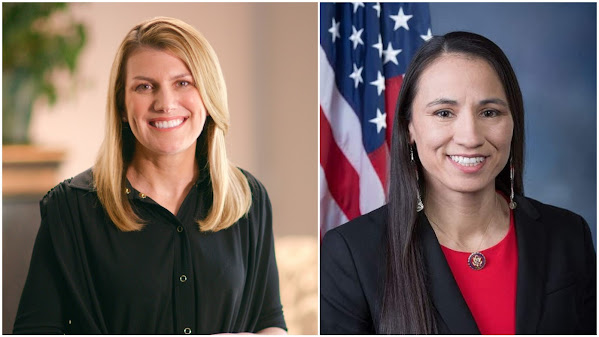 Immigration is a solid issue for Republican and the worsening economy will boost resentment against Prez Biden's border policy.

Accordingly, here's a solid talking point taking on the incumbent . . .

“I am committed to the safety and security of the United States at our borders, and to meeting the needs of the American workforce,” Adkins said.

Adkins’ plan first details the specific measures she will advocate for in Congress to support strengthening our borders. These positions sharply differ from those of KS-03’s current Representative. Sharice Davids has criticized funding a border wall, called for the abolishment of ICE, voted against Title 42 (then tried to walk back her opinion this election year), voted against prohibiting gang members from receiving federal benefits, stated that declaring an emergency at the southern border is “dangerous to our democracy,” and believes that “... we have to get away from thinking of everyone who’s coming to the United States as being a threat.”

The real danger to Kansans lies not in declaring an emergency at the border, but in continuing to allow dangerous substances and people into our country by refusing to acknowledge and fix the crisis Davids, Biden, and the Democrats have created. Kansas City sees news stories on a weekly basis about the record number of overdoses occurring from fentanyl pouring across the border. Human trafficking and smuggling have also increased. And in 2021, CBP encountered 23 terrorists trying to cross into the U.S., “...a level we have never seen before.” Drug traffickers and terrorists are taking full advantage of Davids’ and Biden’s lax attitude.

The second half of Adkins’ plan details measures to support America's workforce and economic growth by stepping back and asking what jobs we are trying to fill and what skills are needed for immigrants to be successful in those jobs. Unfortunately, Davids has not taken workforce or economic planning into consideration. By voting for Biden’s Build Back Better plan, she supported “the largest mass-legalization program for undocumented immigrants in U.S. history.” Biden and House Democrats have promised to seek out bipartisan immigration reform; however, they have failed to deliver.

It shouldn’t be surprising that recent polls showed that when it comes to crime and immigration, voters trust Republicans significantly more than Democrats. Davids and Biden have taken measures that weaken our national security, and Kansans deserve better.
###