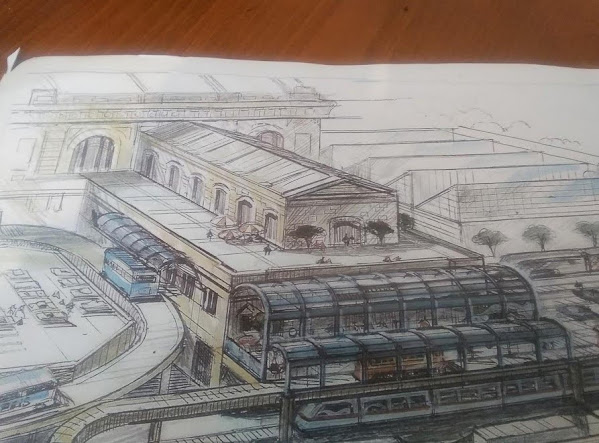 A word from a friend of the blog and glimpse at the current petition he's circulating . . .

His presser title intrigues us and offers a glimpse at his vision . . .

We built it to last forever. But its train-oriented use lasted only half a man's lifetime. Now, its soul is gone. But, the 2022 Petition Initiative brings it back to life as Kansas City's New "Regional Multimodal Transportation Center"

It was always meant to be more than a Children's Museum, exhibit venue or digs for the Chamber of Commerce.  As structures go, it is our... Sydney Opera House, Tal Majal, Bascilica of Rome, Golden Gate Bridge and Notre Dame. It once defined us, helped move us and breathed, within its enormous gracious confines, the life of an emerging "City Beautiful" on the American Plains. It was our community's great gathering place that we left home from and came back home through. It was born in a gilded age and reflected the unbridled youth and passion of an emerging world powerhouse. In its heyday, billions of footsteps pitter-pattered across its fortified marble floors. Just as many voices echoed off its hallowed limestone walls. But unused for decades, it slumped and staggered into an era of decline.  By 1990, it faced a premature death-planned demolition. Even though the people rallied to save it, its transportation soul was left behind.  It now resembles a majestic lion persevering inside a carnival cage. Still a marvel to look at, but its roar and impact is not the same. We know it as Kansas City's Union Station.

The 2022 Petition Initiative will put the roar back into our Union Station by repurposing it into its original purpose.