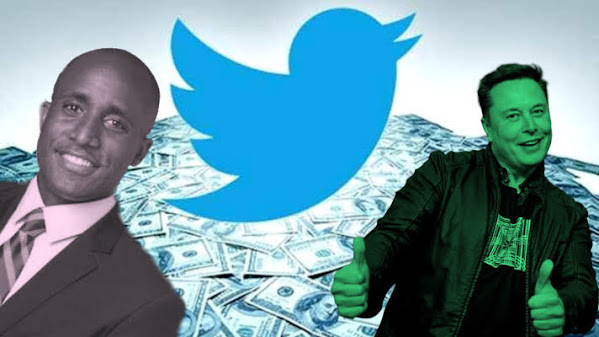 To start this conversation . . .

Let's not forget that there's a former veteran and many of his friends who are frustrated with Kansas City Mayor Q blocking a great deal of their criticism. To be fair, this blog has been critical of Mayor Q and he's never blocked us.

Many conservatives and quite a few locals believe that Elon Musk buying Twitter and taking it private will help protect right-wing "free speech" and offer more opportunities for advocacy. As always, we're skeptical but we'd like to throw the question out there to our blog community who might not be so gullible as to believe a great deal of hype about promises from billionaires . . . Moreover, I think we're all just waiting around to see if he puts former Prez Trump back on the glorified message forum website."

Twitter's board has accepted an offer from billionaire Elon Musk to buy the social media company and take it private, the company confirmed. The announcement ends a weeks-long saga Musk kicked off when he disclosed a large stake in the company.

Twitter Inc is nearing a deal to sell itself to Elon Musk for $54.20 per share in cash, the price that he originally offered to the social media company and called his 'best and final', people familiar with the matter said.


Trump will not return to Twitter even if Elon Musk purchases platform, will begin using his own TRUTH Social

EXCLUSIVE: Former President Trump told Fox News that he will not return to Twitter, even if Elon Musk purchases the social media company and reinstates his account, and instead, will use his own TRUTH Social as the sole platform for his voice.

Twitter on Monday agreed to be acquired by Elon Musk for around $44 billion in cash. The news came just weeks after the tech mogul launched his unsolicited, take-it-or-leave-it offer. State of play: Before he announced he had made an offer for Twitter, Musk had talked about the things he would want to change about the social media platform, from adding an edit button to limiting content moderation.

Tesla's CEO is reportedly in advanced talks with the social media platform, and a deal could be made as early as today.