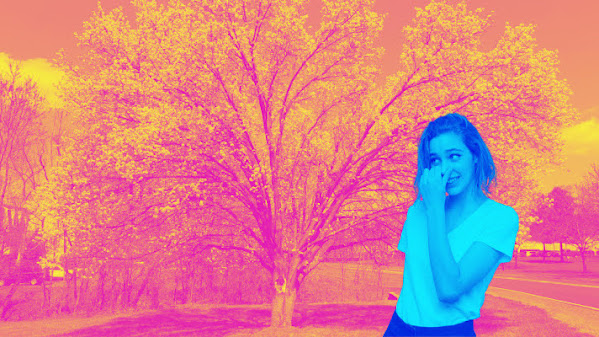 There is, in fact, a war for the environment and its taking place across the landscape of Kansas City.

Amid the Springtime bloom the smell of sex is in the air and locals are doing their best to eliminate any trace of the politically incorrect natural world.

Here's a peek at the prudish hope to prune this cowtown . . .

They're beautiful. The delicate white blossoms of the Bradford pear tree can be seen lining subdivisions throughout the metro. But looks can be deceiving. The trees are highly invasive and dangerous to the environment.

The trees are popular with developers because they look nice and they're inexpensive. On top of that, birds eat the Bradford berries and deposit them all over the place, so the invasive trees keep multiplying.

That's nice but, as always, we want our blog community to get real . . .

"The Pyrus calleryana Chanticleer, more commonly known as “The Semen Tree” is planted as a decorative touch . . . Also known as an Ornamental pear tree or a Bradford pear, this tree has even made it to urban dictionary, where it is described as smelling “like a cross between old semen, dirty vagina, and rotting fried shrimp.”

Another part of the definition that is both newsworthy and educational . . .

"Woman: Hey Darnell, do you smell what's coming from these trees that line the boulevard? I can't seem to put my finger on what it is, but I absolutely love it!

"Man: Those are semen trees, Tina. I always knew you were a f*cking whore."

There's a bounty out on Bradford pear trees. The beautiful trees are everywhere. But environmentalists want them gone and some are going to great lengths to make that happen.They're beautiful. The delicate white blossoms of the Bradford pear tree can be seen lining subdivisions throughout the metro. But looks can be deceiving.

Since you spent the weekend outside, procrastinating all your work for finals, you might have gotten a chance to see some spring flowering action. This of course takes a turn for the worse when you get near those pretty white trees that smell like rank semen.


Here's Why the Trees on Your Street Smell Like Semen


Semen Trees Are Stinking Up America - OK Whatever

Callery pear trees were once a nationwide favorite, but now government and environmental groups are trying to quash the growth of the invasive species - and not just because of their foul smell. You probably wouldn't recognize a Callery pear tree by its flowers.