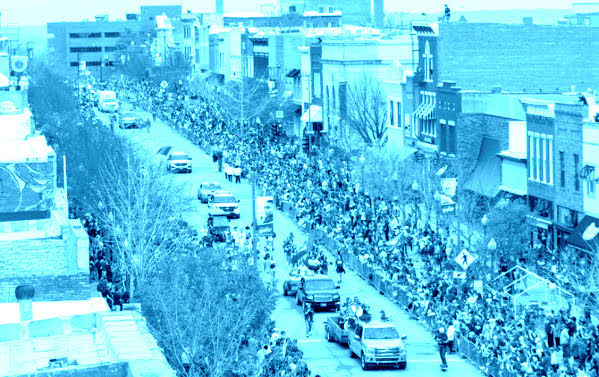 Trolls might find something to hate here but overall this is a wonderful moment in regional history that deserves to be remembered fondly . . . Something to cherish before the sky falls, the next round of COVID plauge or our nuke war with Vlad and his homies . . . Enjoy . . .

"The city’s first championship parade since 2008 unfolded on a warm and sunny Sunday afternoon in downtown Lawrence and it featured enough celebratory footage to fill a documentary.

"By far the most noteworthy, beyond the pure elation on the faces of all who were there, was the fact that Kansas coach Bill Self, along with his wife Cindy and granddaughter Phoebe, rode in the same 1959 powder blue Corvette that he rode in during the championship parade in 2008.

"Owned and driven by Lawrence businessman Doug Compton, it also was the same car that former KU coach Larry Brown rode in during the 1988 championship parade. The specialized front license plate, which had featured the numbers 88 and 08, was updated to include a red and blue 22 to the right of those numbers."

Read more and check the pix via www.TonysKansasCity.com links . . .

The first Kansas basketball parade in 14 years featured some of the same sights and memories from the last two - in 2008 and 1988 - and plenty of new euphoria for thousands of KU fans who took over Massachusetts Street from 6th Street to 19th to celebrate the 2022 national champs on Sunday afternoon.

LAWRENCE, Kan. - The "Rock Chalk Jayhawk" chant echoed across Massachusetts for another weekend. This time to honor the 2022 Men's Basketball National Championship team. The celebration wasn't all about this team's success. There was also a subtle tribute to the long success of the program, which many fans may have missed during the excitement.