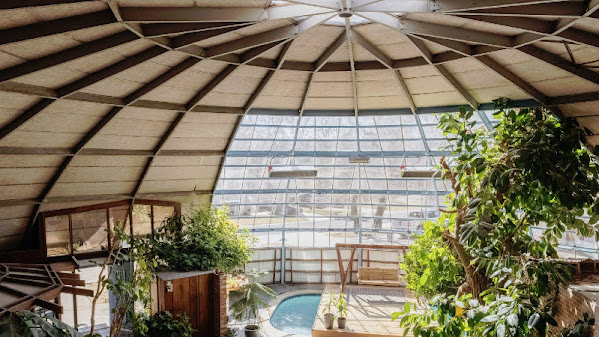 This building is a local favorite and a shining example of local builders using their their powers for good.

"Built in 1968, toward the end of the mid-century modern design movement, it was recently designated as a historic site by the Kansas Historical Society. Considered a Schwedler dome—meridional ribs connected together to a number of horizontal polygonal rings—the house was built by Bob D. Campbell, a structural engineer who was enthralled with domes and all the ways the structures could be used."

This Overland Park Domed House Is Furnished With Tropical Trees

Resembling the top of a parasol, the Campbell Dome House is a true mid-century gem in the heart of a traditional Overland Park neighborhood.

Production space for $125 in Overland Park, KS. The Campbell Dome House is a wholly unique, mid-century modern masterpiece. The Schwedler Dome structure was built in 1968 by Bob D. Ca