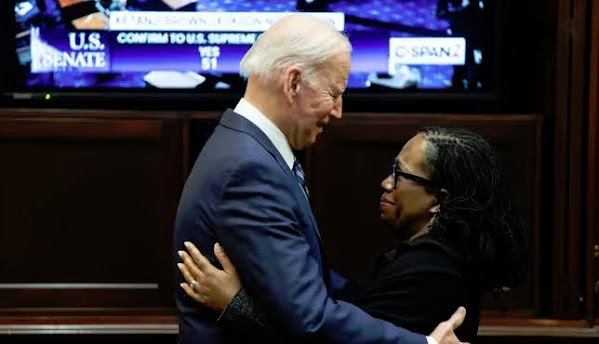 "The four Republicans, Sens. Roger Marshall and Jerry Moran of Kansas, and Sens. Roy Blunt and Josh Hawley of Missouri, had previously announced they would not support Brown Jackson’s nomination.Although all 47 of the votes against Jackson were cast by Republicans, three GOP members, Sen. Lisa Murkowski (Alaska), Sen. Susan Collins (Maine) and Sen. Mitt Romney (Utah) voted in favor of Brown Jackson."

KANSAS CITY, Mo. - The U.S. Senate voted 53-47 Thursday to confirm Ketanji Brown Jackson as the next justice on the Supreme Court. Four of the 47 no votes were cast by senators representing Kansas and Missouri. The four Republicans, Sens. Roger Marshall and Jerry Moran of Kansas, and Sens.

On Thursday, Judge Ketanji Brown Jackson was confirmed to the U.S. Supreme Court by a 53-47 Senate vote, meaning she will become the first Black woman to sit on the court in the nation's history. Jackson won the vote of three Republicans-Sens.


'Judge Jackson stands on the shoulders of giants': women of color on a day to celebrate

etanji Brown Jackson's nomination to the US supreme court has passed the Senate and she will now become the first Black female justice on America's highest legal body after being nominated by Joe Biden earlier this year.

With Judge Ketanji Brown Jackson's confirmation as an associate justice on the Supreme Court, all Americans can be proud that a Black woman will finally sit on the highest court in the land.

In the end, it fell to the nation's first Black vice president to proclaim Judge Ketanji Brown Jackson's confirmation as the first Black woman to ever sit on the Supreme Court. "On this vote, the ayes are 53 and the nays are 47. This nomination is confirmed," Vice President Kamala Harris said, breaking into a broad smile.

WASHINGTON - Ketanji Brown Jackson will make history by becoming the first Black woman to sit on the U.S. Supreme Court, after Democratic and Republican senators voted Thursday to confirm her to the lifetime appointment. The 53-47 vote comes just six weeks after President Joe Biden announced his nomination of Jackson from the White House, fulfilling a promise he first made on the campaign trail.