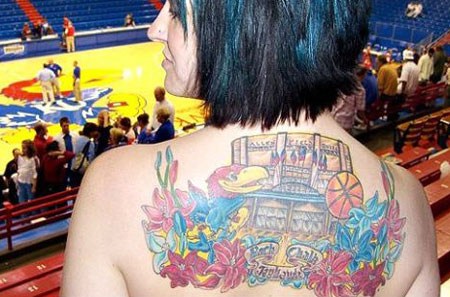 Tonight we celebrate an EPIC victory for this town's favorite college team and the lost youth of so many local suburban readers.

A quick recap of a night on the way to a championship . . .

KU was outstanding shooting the ball, going 54% from three and overall from the field. David McCormack was huge for Kansas, scoring 25 points to go along with nine rebounds. Ochai Agbaji also came up big as he finished with 21 points including six three-pointers.

Jalen Wilson put up a double-double, pitching in 11 points and 12 rebounds. Christian Braun also had double figures finishing with 10 points.

KU headed to the National Championship

David McCormack muscled his way to 25 points, Ochai Agbaji was nearly perfect from the field and added 21 points, and hot-shooting Kansas raced to a big early lead before withstanding every Villanova run for a 81-65 victory Saturday night that sent the Jayhawks back to the national title game.Christian

12:12 AM GMT Myron MedcalfESPN Staff Writer Close Covers college basketball Joined ESPN.com in 2011 Graduate of Minnesota State University, Mankato NEW ORLEANS -- Despite his team's arrival as the only No.

NEW ORLEANS (KSNT) - KU men's basketball punched its ticket to its sixth NCAA Championship appearance. The Jayhawks beat two-seed Villanova, 81-65, in the Final Four. KU quickly jumped to a 10-0 lead, and it stayed strong throughout. David McCormack led the team with 25 points.

LAWRENCE, Kan. - Fans rushed the basketball court inside Allen Fieldhouse as soon as the Kansas Jayhawks beat the Villanova Wildcats to advance to the NCAA National Championship game. The Jayhawks started off hot with a 10-0 lead. Villanova cut the lead to six points in the second half, but that's as close as the Wildcats came.


'Once in a lifetime experience': Jayhawks fans relish win over Villanova

LAWRENCE, Kan. - Five wins down and one more to go, Kansas fans stormed the court inside Allen Fieldhouse after the Jayhawks' win over Villanova Saturday night. "I started shaking, and I just took off sprinting," said Nathan Weyrauch, KU student.


From Bourbon Street to Mass Street, Jayhawk fans thrilled as KU advances in the Final Four

The school of Naismith - of Wilt, of Danny and the Miracles, of so many trophies weighed against all those early-tourney knockouts - got what blue bloods expect. The University of Kansas Jayhawks won a chance Saturday to play in the biggest game possible.

And all of THAT inspires our playlist for tonight . . .

A deep dive hip-hop video that only our friends will find worthwhile . . .

A hair band jock jam classic rock tune regarding the road ahead . . .

As always, thanks for reading this week and have a safe and fun Saturday night . . .