Thanks to KICK-ASS TKC READERS with eagle eyes . . . Our blog community notes a local connection.

About the quick mention . . . We're familiar with the youngster literature from the Kansas 3rd district politico and her book really isn't that controversial. In fact, our quick TKC nitpick is that the politico didn't reference her MMA fighting career which would have interested youngsters and possibly taught an important distinction about fighting with fists vs. confronting challenges with ideas.

However,  it was interesting to see a local name check amid this week's politically charged ruckus . . . Here's a peek at the mention of our high ranking local elected Representative  . . . 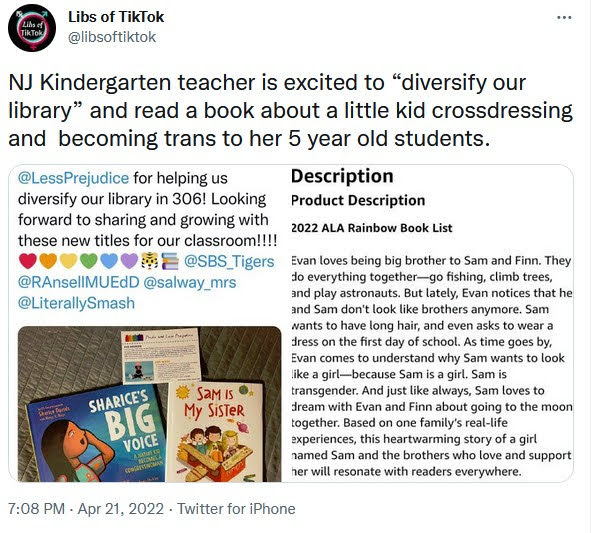 Okay, there wasn't a direct mention but we did see her book that still, obviously, has garnered the scorn of conservatives.

Now, here's one summary of the controversy . . .

Libs of TikTok, which has more than 882,000 followers on Twitter, has drawn the attention of everyone from Florida Gov. Ron DeSantis to Fox News personality Tucker Carlson. And this week it’s in the middle of a firestorm brought on by a report in The Washington Post.

Technology columnist Taylor Lorenz used the power of the Jeff Bezos-owned newspaper to wage war on the account, and in doing so, published the name and profession of the account owner, who had chosen to tweet anonymously. The newspaper initially even linked to her real estate license, which listed an address.

One of Twitter's most popular right-wing hatemongers was unmasked. Good.

On Tuesday, a Washington Post report unmasked the person behind Libs of TikTok, a wildly popular, right-wing social media account that often posts anti-LGBTQ content and peddles disinformation about Covid and the 2020 election. According to the Post, a woman named Chaya Raichik operates the account, whichhas been labeled by progressive watchdog group Media Matters for America as Fox News' "wire service for anti-LGBTQ attacks."


Perspective: Where an article about the 'Libs of TikTok' went wrong

The woman running the "Libs of TikTok" account on Twitter has a way of finding the most mind-blowing content posted by progressives on the internet. Chaya Raichik's posts go viral, not because of anything she says, but because the videos showcase the ideology and agenda of the far left in their own words.

Taylor Lorenz was blasted by an Instagram influencer who said she was being cyberbullied because she has the same name as the operator of the right-leaning Twitter account "Libs of TikTok" who was allegedly "doxxed" by the Washington Post reporter on Tuesday.

A coalition representing more than 2,000 Orthodox Jewish rabbis is calling on the Washington Post to apologize after "doxxing" the owner of Libs of TikTok and identifying her as an Orthodox Jew.


Meet the woman behind Libs of TikTok, secretly fueling the right's outrage machine

Placeholder while article actions load On March 8, a Twitter account called Libs of TikTok posted a video of a woman teaching sex education to children in Kentucky, calling the woman in the video a "predator."