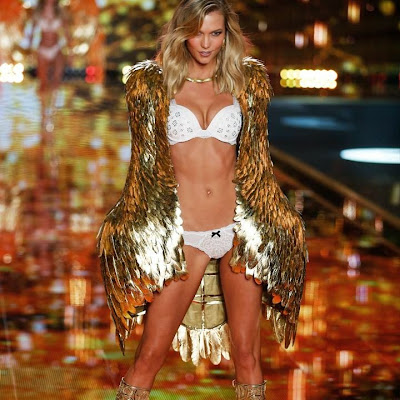 For our most loyal readers we share just a few topics that our on our mind tonight . . .

KANSAS CITY, Mo. - The Kansas City, Missouri, Police Department Accident Investigation Section responded to a two-vehicle collision just after 5 p.m. Sunday near Paseo and Armour boulevards. When a blue Ford Focus traveling north on Paseo Boulevard decided to make a U-turn in the roadway just past the intersection of Armour Boulevard, a green and black Kawasaki Ninja motorcycle struck the Ford.

KANSAS CITY, MO (KCTV) --- The Kansas City, Mo., skyline will be honoring the Kansas Jayhawks on the eve of the national title game against the North Carolina Tar Heels. Yes, that's right: Kansas City, MISSOURI. It will be hard to miss crimson and blue if you're in KCMO on Sunday night.

Karlie Kloss Melds Her Love For Wellness And Tech

Karlie Kloss, model, mother, and entrepreneur has been pursuing her many ventures through the lens of balance. Throughout her career, she has juggled jet-setting around the world for designer campaigns, her ventures in tech with her program Kode with Klossy which allows young women to access learning opportunities in the coding and tech world.

President Biden's campaign pledge to create "millions" of jobs has hit a challenge: finding workers. Why it matters: Job potential from building out clean energy and "onshoring" - bringing home - overseas manufacturing hasn't panned out or has been overstated. His words have been more political statement than governing result.

Trump referred to White House press secretary Jen Psaki as "the woman with the really beautiful red hair." The former president addressed reports that Psaki is poised to leave the White House and join MSNBC. Trump has a long record of commenting on women's appearances.

WASHINGTON - Former President Barack Obama will return to the White House on Tuesday for the first time since he left office to promote the Affordable Care Act in an event alongside President Joe Biden, a White House official said.


Tugging On Musical Heartstrings Amid War

A couple of weeks ago, it seemed like a joke when Oscars host Amy Schumer suggested that Ukrainian president Volodymyr Zelensky should Zoom into last week's ceremony to spread awareness about Russia's brutal war against his country.

Maggie Rawlins put her modeling career on hold to work as a registered nurse in New York during the coronavirus pandemic.

It was not long ago that the Kansas City Chiefs and Houston Texans were on the same trajectory. The Texans led the Chiefs 24-0, in Arrowhead Stadium no less, during the 2020 AFC divisional round. The Chiefs made a stunning comeback, ultimately winning 51-31.

Monday will be partly sunny, highs in low 60s

Hide Transcript Show Transcript OVERNIGHT LOW DROPPING TO 42. TOMORROW, WE WILL HAVE SUNSHINE. NOT SO BAD WHEN IT COMES TO OUR FORECAST. WIND SPEEDS WILL BE SHIFTING TO THE NORTHWEST DIRECTION. HIGH TOMORROW 61 DEGRE.ES ON THE NINE-DAY FORECAST, MONYDA LOOKS GOOD. WIDESPREAD SHOWER ACTITIVY AND A COUPLE THUNDERSTORMS ON TUESDAY.

And this is the OPEN THREAD for right now. Hopefully, we'll have more for the Monday morning update.