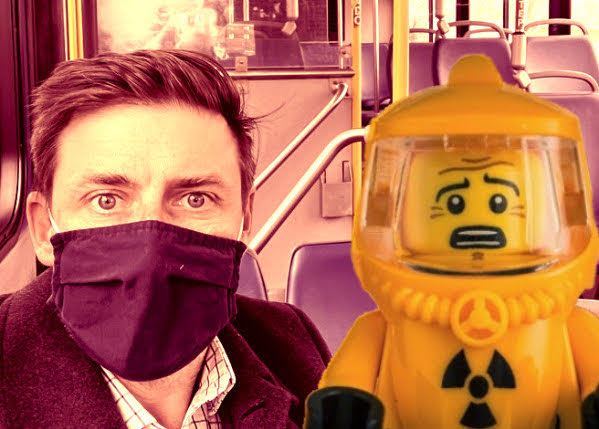 Don't worry . . . There are very few voters who REALLY care about the transit predilections of KCMO council Dude Eric Bunch . . . But his constant mean tweet slap fighting with constituents and trolls is surprisingly entertaining. 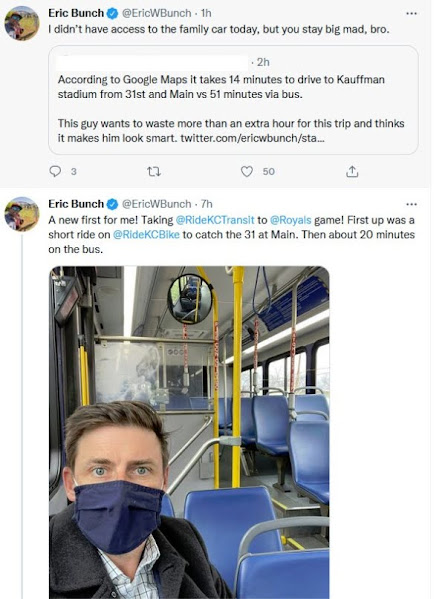 Overall we'd say that Council dude Bunch came away winning this social media dust up to the delight of craft beer drinkers across Midtown.

It's not exactly a newsflash or point of contention that taking the bus is a more cumbersome process than driving . . . But what we notice is that despite free rides and quite a bit of transit hype over years and decades . . . The councilman seems lonely on his ride to the ballpark by himself . . . Honestly, it doesn't look like much fun even if we can't see whether or not the council dude is smiling behind his mask. Accordingly, promoting this "experience" to beleaguered taxpayers asked to finance a downtown stadium might require slightly better salesmanship.

And all of THAT leads us to a quick recap of opening day . . .

KANSAS CITY, Mo. - Bottom of the eighth, two outs, runner on second, 1-0 count. Up to this point in the game, Kansas City Royals rookie Bobby Witt Jr. was hitless at 0 for 3 but made contact with the ball each time with a flyout and two groundouts.

The Royals win their opener against Cleveland and Bobby Witt Jr has the game winning hit! There hasn't been this much hype about a player for the Royals in a while, and he delivered the game winning RBI in the late innings for his club. Tiger Woods was goo...