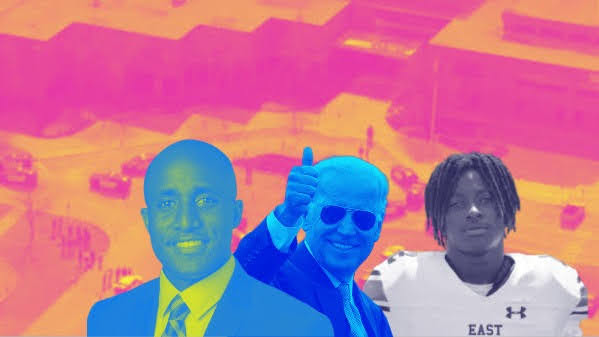 Here's the thing about "ghost guns" that some of the most brilliant readers from our blog community want people to know . . .

Most of the time, the people who commit crimes with ghost guns didn't make them or even legally purchase the controversial bit of kit . . . They stole the tech guns because they're criminals who would commit crimes with any weapon they could get their hands on.

Accordingly, today's KCMO partnership with the White House was mostly propaganda that won't help make local streets safer and only serves to perpetuate a phantom illusion that elected leaders are helping to curb crime.

"Several weeks ago, a ghost gun made headlines in the Kansas City metro when an Olathe East High School student was accused of using the untraceable weapon in an exchange of gunfire at the school.

"The student, 18-year-old Jaylon Elmore, the school resource officer and an assistant principal were all injured. Elmore faces a charge of attempted capital murder. The Olathe East shooting on March 4 came just six days after a ghost gun also was used in the fatal triple shooting in Lenexa, which police have ruled was a double murder-suicide, court records show.

"The incidents highlight the need for federal regulation of untraceable gun kits and parts, Johnson County District Attorney Steve Howe said at the time. “We knew they existed, but here within a couple weeks we’ve seen where people have lost their lives or been injured in very public situations,” he said. “It’s now time for us to start having a conversation with our Congress about putting some restrictions and not allowing people to buy these firearms.”"

Biden announces measures to crack down on 'ghost guns'

Joe Biden has announced an attempt to crack down on "ghost guns", kits which can be bought without a background check, from which a working gun can quickly be made, and which have been used in an escalating number of shootings.

WASHINGTON - Kansas City Mayor Quinton Lucas will join President Joe Biden at the White House Monday afternoon. The event will focus on preventing gun violence, something Mayor Lucas has promised to do everything in his power to do while in office. Monday's event is expected to begin at 1:15 p.m.


Biden's solution to the politics of rising crime: Focus on guns

It was an effort to put some political muscle behind a finalized ghost gun rule that has been praised by advocates and law enforcement alike. More broadly, it was an attempt by Biden to regain his footing on a political front that is currently bedeviling him and Democrats.