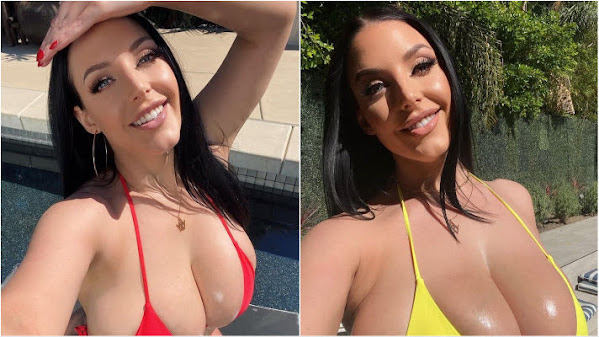 Right now we share a peek and many reasons why pr0n hottie Angela is one of our faves as she inspires this peek at pop culture, community news and top headlines.

KANSAS CITY, Mo. - Members of the International Union of Painters and Allied Trades Local 2012 will strike on Tuesday. The union encompasses trades from painting and glazing to drywall and flooring. Members voted to strike because they "answered the call to work during the height of the pandemic" and continued to work, but have not had successful negotiations to increase payment.

In Johnson County, biologists are poisoning trees to save birds and butterflies

Let's talk about very hungry caterpillars. In Kansas and Missouri, they face an increasingly difficult time finding things to eat. That's making it ever harder for butterflies and moths to survive. Their populations are shrinking, especially in the Midwest , and the birds that eat them are disappearing, too .

It might look like an indie rock music festival on the outside, but a just-announced, three-day event coming to Kansas City this summer is as much about the heartbeat of innovation in the region as the beats dropped by Grammy-nominated headliner Black Pumas, said Sonia Hall.

KANSAS CITY, Mo. - Cori Smith, owner of BLK + BRWN bookstore in Kansas City, Missouri, focused on amplifying the voices of "Black and Brown storytelling," is now rewriting her story after her business was hacked nearly a month ago. "Books, book nooks, contact information, all of my email subscriptions and lists to customers ...

WASHINGTON - President Joe Biden bemoaned the spike in gas prices as being driven by a "dictator" who committed "genocide half a world away" in a speech Tuesday that was an apparent reference to Russian President Vladimir Putin and the invasion of Ukraine.

Prominent GOP pollster Frank Luntz said in a recent interview that Republicans in private are mocking former President Trump and they are "tired of going back and rehashing the 2020 election." Luntz said he was not surprised by comments made by New Hampshire Gov. Chris Sununu (R) that gained attention from the Gridiron Club's annual...

CBS News Tokyo - The U.S. State Department has ordered all non-emergency consular staff to leave China's largest city, Shanghai, as the global business hub enters its third week of lockdown in response to a surge in COVID-19 cases. The U.S.

Baskin-Robbins is making some changes.


Excellence Reviewed Across The Bridge

Barbecue is a tough business, especially if you're using live-fire pits that need to be tended round the clock. This new place in downtown Parkville serves "old-style" live-fire meats.

Hide Transcript Show Transcript MINNESOTA AMONG OTHERS FOR US THOUGH. WE'RE STILL IN THE ACTIVE SIDE OF THIS BOUNDARY. EVENTUALLY, IT'LL MOVE THROUGH AND EVENTUALLY IT'LL SPAWN A FEW SHOWERS AND THUNDERSTORMS THAT COULD BE STRONG DAMAGING WINDS DAMAGING HAIL AND ALONG THE LINE CANNOT RULE OUT THE POSSIBILITY OF TORNADOES, TBU JUST TO SHOW YOU EXACTLY HOW STRONG THE SYEMST IS.

alt-J - Hard Drive Gold is the song of the day and this is the OPEN THREAD for right now.