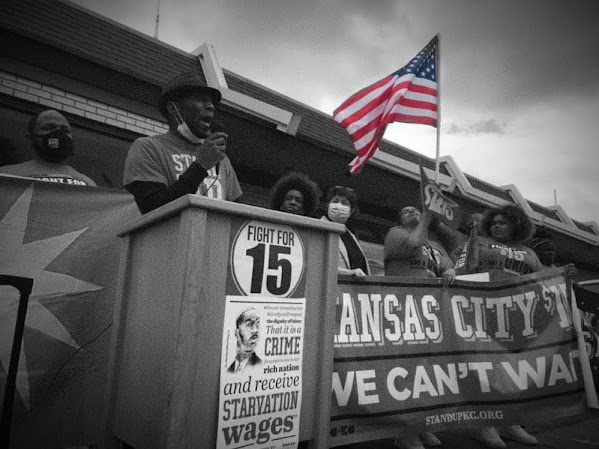 For better or worse, harsh economic reality has the potential to change politics more rapidly than years of advocacy.

Over the course of nearly a decade groups like Stand Up KC have led the effort to earn a $15 per hour minimum wage and unionization rights.

Currently, Starbucks is the latest local franchise that has been hit with an array of union advocacy.

A sharp decline in food prices and worsening food inflation now present a more dire challenge to the industry.

High priced food could force many locals to give up the convenience drive-thru cuisine and stick to home-cooked junk food.

Data confirms the price spike and offers a preview of its implications . . .

"Data from what's known as the Big Mac Index shows the price of McDonalds' signature sandwich has risen 40% over the past decade. Where wages are higher, the cost of a Big Mac generally goes up."

"Bank of America analysts, led by Alexander Lin, said in a note on Thursday that they expect U.S. food inflation to hit 9% by the end of 2022.

"Rising prices for staples like bread, milk, and meat should continue this year as the price shock from the Russia-Ukraine conflict hits American grocery stores.

“Looking ahead, we think that consumers will continue to feel the pinch of elevated food inflation,” the analysts wrote. “While there has been a lot of attention on the shock from the Russia-Ukraine conflict, we believe that it is too early to see the impact at the grocery store…rather, it should lead to sustained price increases later this year.”

HOMEWOOD, Ala. ( WIAT) - It's going to cost you a little more to get a side of fries with your meal at your favorite fast food restaurant. The National Restaurant Association is reporting a seven percent increase in fast-food prices over the last 12 months - the highest price jump in decades.

Rising fast food costs are putting American eaters in a pickle. Grilling the news: Fast food menu prices are up 7.2% year-over-year, according to the National Restaurant Association. The Big (Mac) picture: These prices are mainly driven by the rising costs of food and labor.


'It didn't feel like $80 worth of food': Inflation is making it hard to make healthy food choices

Federal officials earlier this month said inflation hit a 40-year high and the consumer price index jumped 8.5% annually. For those who were already struggling, the rapid increases are forcing even tougher choices about what, when and how often to eat. On average, Americans spend about 10% of their income on food.

Industry data show that Americans are spending more on food than before the . And in a sign of the times, that is driving up food prices amid the sharpest bout of inflation in the U.S in 40 years. "Customer demand continues to outpace our ability to supply products," Tyson Foods CEO Donnie King told a quarterly earnings call in February.

Bank of America sees food prices rising by 9% in 2022 as the Russia-Ukraine conflict creates rising costs for farmers.