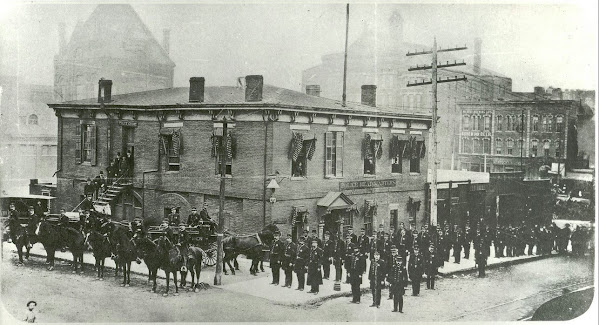 The photo above features the old KCMO police HQ from more than 100 years ago.

And THAT inspires this quick compilation of reports on police action, court cases and, as always, a bit of hope in the constant fight against crime.

Caught on camera: Kansas City couple finds themselves in line of gunfire

KANSAS CITY, Mo. - A husband and wife found themselves swerving away from gunshots in Kansas City and it was all caught on video. It happened Friday as the couple left a friend's house to go home. The moment left them comparing the experience to the video game Grand Theft Auto, describing it all as surreal.

A staff member in the Park Hill School District is on leave and under investigation following a report of "inappropriate behavior."The principal at the district's LEAD Innovation Studio, Ryan Stanley, said in a letter to families that the school "reported the allegations to the Children's Division and law enforcement officers are investigating to see whether or not there was criminal activity."The LEAD Innovation Studio is for high school students to do self-directed and project-based learning.Stanley said that the school could not provide details because authorities are investigating and because it was also a personnel matter.

A Jackson County jury has awarded nearly $7 million to a former county sheriff's deputy who alleged age and disability discrimination and a hostile work environment. Doug Caster, now 67, had worked for the sheriff's office for nearly 34 years when he filed a civil lawsuit in 2016 against Jackson County.

SHAWNEE, Kan. - A Kansas man has been charged with first-degree murder in the 2018 deadly stabbing of another man. Vincenzo Anecio Lucasta, 49, of Paola, Kansas is set to appear in court Wednesday afternoon and his Bond is currently at $2,000,000.

Officials with the Clay County Sheriff's Department are thankful no one was seriously hurt after Liberty police and Clay County deputies were accosted by a suspect.Liberty police said officers were leaving the scene of a disturbance call early Wednesday morning when they heard a car accelerating up the road.

BELTON, Mo. - Court documents detail the events leading up to a man stabbing a woman multiple times in the face in at Casey's General Store in Belton. James Cook, 42, was charged with first-degree domestic assault with serious injury and armed criminal action and is being held without bond.

KANSAS CITY, Mo. - A former girls volleyball coach was sentenced to 32 months in prison for asking a teenage player to send him obscene pictures of herself. Levinson Gibson, 27, pleaded guilty earlier this year in Leavenworth County District Court to one count of sexual exploitation of a child, according to a news release from the Leavenworth County Attorney's Office.

LEE'S SUMMIT, Mo. - A trial is scheduled for a Kansas City, Missouri, man charged with a deadly shooting on an Amtrak train in Lee's Summit. Prosecutors charged 21-year-old Marquise Webb with second-degree murder, unlawful use of a weapon, and other related crimes in January.

KANSAS CITY, Mo. - Coworkers, past and present, came together Monday to honor the life of the KCUR reporter who was shot and killed in her home. It's been one year since Aviva Okeson-Haberman died, but the 24-year-old leaves behind a lasting legacy. "Like a once in a generation talent," KCUR News Director Lisa Rodriguez said.

A drug summit Wednesday at Oak Park High School warned Clay County parents and teens about the deadly consequences of fentanyl."It's going to kill a large portion of an entire generation of Americans if we don't get a handle on it," said Sgt.

KANSAS CITY, Kan. - Vandals have gotten in the way of improvements underway at Wyandotte County parks. The Parks and Recreation department said it is working to improve the parks so everyone can enjoy the public spaces. The department said it has been targeted by vandals this week.

The highlighting of wrongful conviction cases by the news media has been a critical step towards exoneration for a number of innocent prisoners. How the media impacts wrongful convictions will be the focus of the Faces of Innocence virtual event Thursday evening, put together by the Midwest Innocence Project.

KC group takes steps to solve crimes KANSAS CITY, Mo. - Kansas City is on pace to set a new record for the number of homicides in a year, if the current rate continues. According to data from the Kansas City Police Department, 47 people have been killed in Kansas City so far this year.