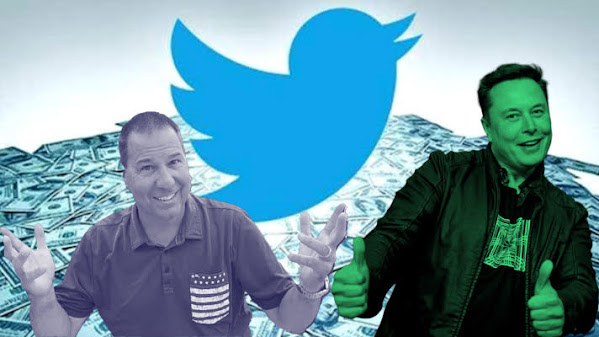 Spending too much time worrying about sketchy stock moves is never a good idea for broke-ass plebs. Also, there's just something unwholesome about rooting for the world's richest man.

To be fair . . . We understand how the idea of a dude with limitless cash fighting for our constitutional right to troll public officials would appeal to online denizens.

And so we turn to KK for his perspective regarding online antics of our betters . . .

"Elon Musk is still trying to buy Twitter and a Saudi Prince is trying to stop it.  Musk then did what Phil Mickelson did and put a spotlight on the lack of freedom in that country, slapping the Prince right in the face."

The Missouri House is passing a sweeping Elections Bill that will call for a full audit of registered voters and give school districts the option to hold elections on things like biological males playing in girls sports. This is such good news, let's g...

Elon Musk, the world's richest man, is willing to shell out $43 billion for Twitter in a quest to ensure that what he described as the world's "de facto Town Hall" becomes a platform that plays fair.

Elon Musk's will-he won't-he Twitter saga is giving Wall Street indigestion, Volkswagen's volume-seller EV is taking root in most of the world except the States, and Stellantis wants to ask that you hang on for the electric Ram. All that and more in this Friday edition of The Morning Shift for April 15, 2022.

Saudi Prince Alwaleed bin Talal Al Saud, a billionaire who is also one of Twitter's largest shareholders, tweeted that he will vote to reject Elon Musk's $41 billion all-cash bid for the company - leading Musk to question Saudi Arabia's commitment to free speech.

It's not often that a company receives a takeover bid that amounts to an 18% stock premium only to see its shares fall on the news. That's what happened to Twitter on Thursday after Tesla CEO Elon Musk submitted a bid to buy the company for $54.20 a share, or about $43 billion.

The intrigue over Elon Musk's bid to buy Twitter has descended into a "full-blown Elon circus" at the social media company that will derail its business in the coming months, according to one Wall Street research analyst. Musk's offer to buy Twitter at $54.20 per share and take the company private is a distraction that overshadows the company's actual business operations.


Mark Cuban says Elon Musk is 'f--king with the SEC,' thinks Twitter will 'do everything possible not to sell'

Dallas Mavericks owner Mark Cuban chimed in on Elon Musk's attempt to purchase Twitter for $43 billion, saying that he thinks the Tesla CEO is "f------ with the SEC" and that Twitter will do everything in their power not to sell.