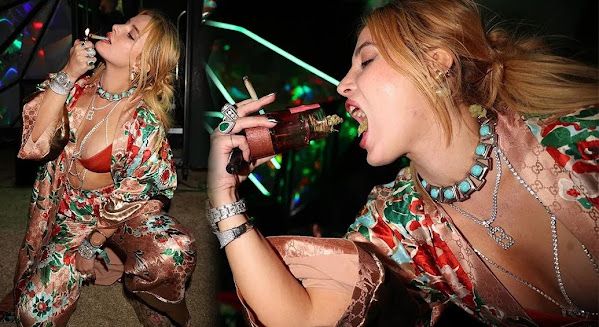 There's a lot to cover for the late night and right now we're inspired by hottie Bella to consider a quick blast of pop culture, community news and top headlines.


More Housing Up In Flames

KANSAS CITY, Mo. - After a fire earlier this month at Stonegate Meadows apartments in Kansas City, tenants tell FOX4 their living situations are unacceptable. Fifteen people had to be treated at the hospital after someone set a fire in a common area of the apartment building.

Police in Kansas City said they are investigating a death as suspicious near East 50th Street and Euclid Avenue Wednesday night.Authorities said officers were called about 8:30 p.m. to home to meet emergency medical personnel.Police said officers found the man lying on the floor of the home.

Cannabis cultivation. // Photo by Ryan Lange When I was 19, I was back in Kansas City from KU for winter break. My friends and I decided to meet up at our old high school so that we could all get in one car and smoke weed. In hindsight, what a brilliant idea.

Ahead of new forecast, Kansas banks $500M for emergencies

The effort to legalize marijuana for adults 21 and older is gaining ground in Missouri.A citizen-led petition said it has enough signatures to get a marijuana constitutional amendment on the ballot.

Driving up to actress and cannabis entrepreneur Bella Thorne's hilltop mansion in the picturesque backcountry canyons outside of Los Angeles, one could be forgiven for thinking that they were instead somewhere much more off-the-grid.


Gloves Come Off Over U.S.. Transit Unmasked Amid Yet Another COVID Surge

The Justice Department has moved to appeal a ruling that struck down the federal mask mandate on planes, trains and transit systems after a request by the Centers for Disease Control and Prevention.

President Joe Biden has reportedly told former President Barack Obama that he intends to run for re-election in 2024, but the case for a second term is quite weak - and voters know it even if Democrats in dreamland don't.

Trump Denies Claim He Stormed Out of Piers Morgan Interview

Upset that his one-time buddy Piers Morgan pressed him on his 2020 election lies, former President Donald Trump appeared to storm out of a pre-taped interview in a huff as he shouted "turn the camera off," according to a promotional clip released Wednesday afternoon.


In Defense Of Cont'd Masking

Can 'one-way masking' really protect you from COVID on a crowded plane?

As soon as a federal judge in Florida struck down the United States' long-standing nationwide mask requirement for airplanes, trains, buses and other public transportation on Monday, COVID-19 experts took to Twitter to reassure uneasy travelers that they still have the power to protect themselves - even when everyone else on board is going gleefully maskless.

'Days or hours left': Russia tightens the noose in Mariupol

KYIV, Ukraine (AP) - Russian forces tightened the noose around the defenders holed up Wednesday in a mammoth steel plant that represented the last known Ukrainian stronghold in Mariupol, as a fighter apparently on the inside pleaded on a video for help: "We may have only a few days or hours left."

Russia announced the first test launch of its new, nuclear-capable Sarmat intercontinental ballistic missile (ICBM) system on Wednesday. The rocket, launched from a facility in northern Russia towards a firing range in the east, should give the country's enemies pause, according to Russia president Vladimir Putin.

Johnny Depp blamed Amber Heard for poop found in their bed after a fight. Heard blamed it on her dogs, but Depp said they weighed only four pounds and couldn't produce that much. The poop mystery also came up in Depp's earlier UK trial, which he lost.


Baller Change Up For Good Cause

OVERLAND PARK, Kan. - Former Kansas City Royals pitcher Ian Kennedy's Overland Park estate is going up for sale. To sweeten the deal, all proceeds from the sale will benefit Consider the Lily, a nonprofit in the Philippines that helps rescue girls from exploitation.

The Arts Asylum opens in Brookside with "Gabby for God"

The Arts Asylum opened its doors in 2011 with one mission - to provide "a safe space to create." After 10 years of hosting, promoting and making art, and in the process, engaging over 17,000 people a year, they made the difficult decision to leave their well-loved historic building and theater at 1001 E.

Thursday will be partly sunny, storms possible later in the day

Hide Transcript Show Transcript REGION, THIS WILL LIMIT THUNDERSTORM DEVELOPMENT. THERE IS A CHAE WENC COULD PICK UP ON ATORM S AS WE GO THROUGH THE NEXT SEVERAL HRSOU YOU SEE IF YOU SHOWERS, MAYBE A RUMBLE OF THUNDER. WELL SOUTH OF THE METRO, REALLY SOUTH OF HIGHWAY 50, TOWARDS BUTLER, CLINTON AND WARSAW, THERE IS A NINE CLOCK P.M..

Fredo Bang - Last One Left Feat. Roddy Ricch is the song of the day and this is the OPEN THREAD for right now.