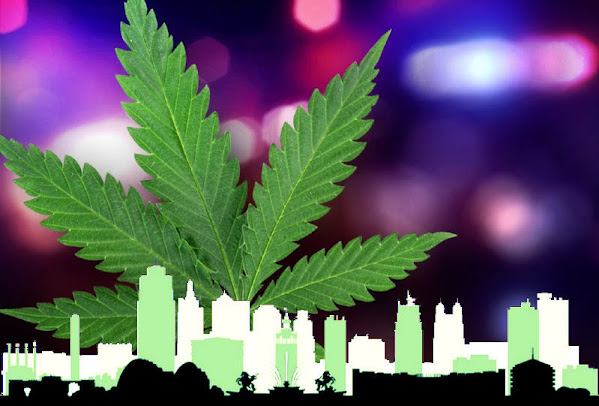 The novelty of today's stoner celebration has mostly warn out because even mainstream media is no longer afraid to mention that this battle in the "war on drugs" has been lost.

REALITY CHECK . . . MARIJUANA IS NOW MORE WIDELY AVAILABLE THAN BUBBLE GUM AND AMERICANS ARE JUST BIDING THEIR TIME UNTIL ITS LEGAL!!!

WEED LAW ARE CONFUSING AROUND THE KANSAS CITY METRO WITH STRICT PENALTIES IN SOME PARTS OF TOWN AND A MORE LAISSEZ-FAIRE ATTITUDE FROM PROGRESSIVE POLITICOS IN KC PROPER!!!

Remember a move in 2018 that came in handy for many during pandemic lockdown: Jackson County will no longer prosecute marijuana cases

Even the Mayor's advocacy is conditional yet enthusiastic . . . 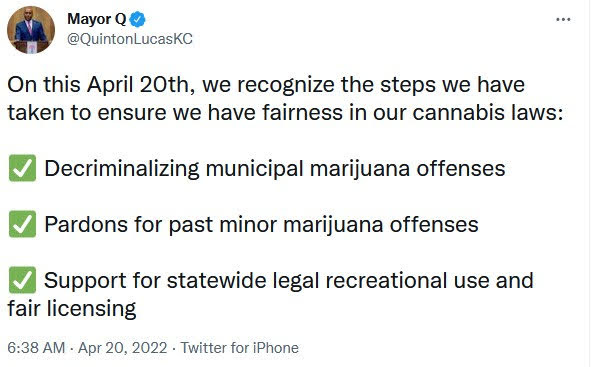 Like it or not Mayor Q has garnered more progress on weed laws than any other politico in KCMO history . . . However, he encourages locals to celebrate responsibly today . . . And assures us that he doesn't partake in today's holiday.

Americans flocked to social media and public spaces on Wednesday to celebrate 4/20, an unofficial holiday dedicated to smoking and celebrating marijuana. Social media users across multiple platforms rang in the holiday by posting pictures of their marijuana and smoking accessories, and many called for the legalization of the drug nationwide.

OLATHE, Kan. - The Johnson County Sheriff's Office will have more units on the streets searching for impaired drivers during "4/20." April 20, synonymous with marijuana use, is also known as a marijuana holiday.

KANSAS CITY, Mo. - The Kansas City, Missouri, Police Department and prosecutors in the Northland have announced a new operation targeting the sale of illegal vape cartridges containing THC at businesses in the area. The operation has been named "Operation Delta-Free Youth," and the goal is to remove the THC vape cartridges from store shelves, according to a release from Platte County Prosecuting Attorney Eric Zahnd.

A group pushing a constitutional amendment that would make recreational marijuana legal in Missouri says it has collected enough signatures to put the issue on the ballot but it plans to gather thousands more signatures.Legal Missouri 2022 announced Tuesday it has 200,000 signatures supporting the amendment, KMOV-TV reported.The group wants

First-Ever "420 Flower Fest" To Feature Certified Medical Cannabis Experts, Live Music, Hot Rods, Food Trucks, and a Chiefs Hall of Famer. April 20th or "4/20" has long been celebrated as a smoking party holiday in the cannabis community. However this year, the first-ever 420 Flower Fest puts the focus on the medical benefits of cannabis.

KANSAS CITY, Mo. - A Gladstone man who was injured in a shoot-out when his drug-trafficking customers tried to rob him has been sentenced in federal court for his role in a conspiracy to distribute marijuana, including selling marijuana near a public school, and illegally possessing firearms. Carreon L.

The unofficial marijuana holiday known as 4/20 has arrived again. And as more states have moved to end prohibition, more brands, celebrities and organizations are feeling emboldened to lean into the occasion with cannabis-centric deals, quips and campaigns. From food companies like Ben & Jerry's and Domino's to nonprofits such as the ACLU to celebs [...]


'The Pope Of Pot' Details A Long Career Reporting Around Cannabis With Cameos From Hunter S. Thompson, Ice Cube And More

Legendary magazine journalist Mike Sager has so far lived a life most people can only dream of. Some of that is detailed in his latest release, The Pope of Pot , which is a collection of stories and essay's from the writer's travails in and around the weed world.