The latest local killing puts this cowtown on track to repeat a historic cycle of violence.

Here are the numbers from the latest KCPD blue sheet that was published yesterday . . . 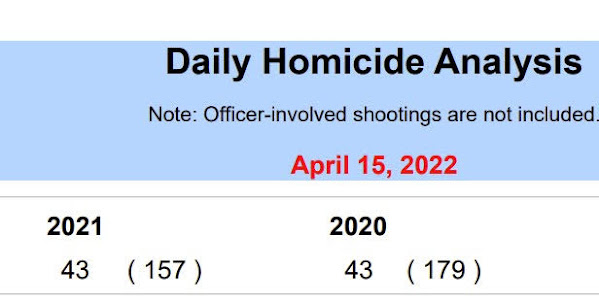 Another THREE murders in less than 24 hours have put Kansas City back on track for another tragic & deadly year.

And 2021 was the 2nd deadliest year in local history.

REPORTS OF RECENT MURDERS PUSH THIS COWTOWN PAST THE RECORD SETTING PACE FOR HOMICIDES OF OVER THE PAST TWO YEARS!!!

Just after 7pm last night, officers were called to a residential facility in the 1500 block of Campbell in regard to an EMS call for service. Upon arrival, officers located the victim, an adult male, suffering from unknown injuries.  The victim was transported to the hospital in critical condition.

Detectives and Crime Scene Personnel responded to the scene last night.  They processed the scene for evidence and spoke to witnesses.

Unfortunately, the victim succumbed to his injuries and was pronounced deceased at the hospital.  The Medical Examiner’s Office determined the victim died of internal injuries and has ruled this death a homicide.

A subject of interest has been identified and detectives will present this case to the prosecutor’s office to determine any applicable charges.

Detectives ask if you have any information in regard you would give them a call at 816-234-5043.  Or you can remain anonymous by calling the Tips Hotline at 816-474-TIPS.

KANSAS CITY, Mo. - The Kansas City, Missouri, Police Department is investigating an incident in the 1500 block of Campbell. Friday night officers arrived at a residential facility around 7 p.m. and located an adult male suffering from unknown injuries. The victim was transported to an area hospital in critical condition.

Kansas City, Missouri police say a man who was injured last night at a residential facility has died. Police say just after 7 p.m. Friday officers were called to the facility in the 1500 block of Campbell St. They found a man with unknown injuries who was taken to the hospital in critical condition.

Here's the report from this morning's murder . . .

Just after 3:15am, officers were called to the 8600 block of Newton in regard to sounds of shots.  While officers were en route, the call was updated to a shooting.  Upon arrival, officers located the victim, an adult male, suffering from apparent gunshot wounds.  EMS responded to the scene and declared the victim deceased.

Officers detained a subject of interest at the scene.

Detectives and Crime Scene Personnel have responded to the scene.  They will be processing the scene for evidence and speaking to witnesses.

A shooting in southern Kansas City, Missouri, has left one man dead.Police say they got a call about the sound of gunfire in the area of 86th Street and Newton Avenue at around 3:15 a.m. Saturday morning. Officers arrived on scene and found the victim with bullet wounds.

KANSAS CITY, Mo. - One man has died in an overnight fatal shooting in Kansas City, Missouri. The homicide took place shortly after 3:15 a.m. Saturday in the 8600 block of Newton Avenue.