The warmer weather that comes with Springtime has started a bloodbath in Kansas City.

Check the latest on a DEADLY TRIPLE SHOOTING that add more victims to this year's steadily rising body count . . .

This morning around 3:15am, officers were on scene at E 38th Street and Wabash Ave in regard to a non injury crash.  While on scene, officers heard several sounds of gunshots.  Officers immediately located the location of the gunfire at a residence in the 3800 block of Wabash.  Officers located three victims near the residence.  EMS responded to the scene.

One of those victims was pronounced deceased at the scene.  The second victim was transported to the hospital with non life threatening injuries.  The third victim refused medical treatment at the scene and their injuries were minor.

Preliminary information at the scene is there was a house party at the residence where the shooting took place.

Detectives have responded to the scene along with Crime Scene Personnel.  They will be processing the scene for evidence and speaking with witnesses.

Detectives believe there are several witnesses who fled the scene prior to their arrival understandably so for their safety.  We are asking those witnesses to call detectives at 816-234-5043.  Or you can remain anonymous by calling the TIPS Hotline at 816-474-TIPS.  There is a reward of up to $25,000 for information leading to an arrest. 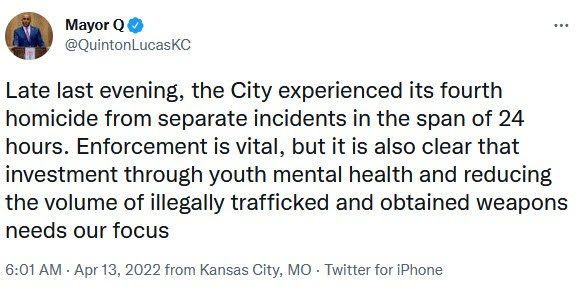 KANSAS CITY, Mo. - Three people were shot and one was killed at 38th Street and Wabash Avenue early Wednesday morning. Kansas City police were called to the scene shortly before 4:00 a.m. on a shooting call. Upon arrival, officers discovered three people had been shot. One person was pronounced dead at the scene.

KANSAS CITY, Mo. - One person is dead and two are injured following a shooting at a house party in the 3800 block of Wabash Avenue early Wednesday morning. At about 3:15 a.m., Kansas City police officers responded to a non-injury crash in the area when they heard gunshots coming from a nearby residence.