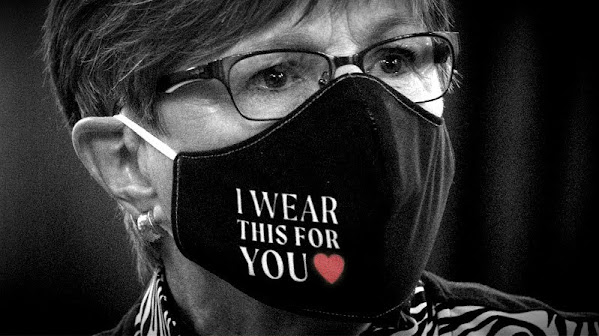 This week the Kansas Democratic Party leader records an ABSOLUTELY STUNNING string of victories against a Republican Super Majority in Kansas that struggles to find leadership and unity.

Among the Sunflower State right-wing ishe has scathing critics but apparently those folks don't have much sway in the state house.

At the start of this year Republicans seemed to support universal rebuke of this embattled politico but the conclusion of their work session shows a lack of commitment against the governor and, more importantly, a sign that she might be able to ride out the upcoming nationwide GOP red wave.

Here's a peek at the stich going into the end game of the session . . .

SOURCE: File image Conservative Republican lawmakers have approved a measure that would prohibit Kansas or its cities, counties or school districts from imposing mask mandates to control the spread of any infectious disease. But the measure's supporters fell far short early Friday of the two-thirds majorities necessary in both chambers to override a veto from Democratic Gov.

The Kansas House of Representatives failed on April 28, 2022, to override Governor Laura Kelly's veto of two civil rights bills - despite the Kansas Senate voting to override. The House voted to override Kelly's Veto of , the Parents Bill of Rights," which states that all parents have a right to direct their child's upbringing, education, care, and mental health.