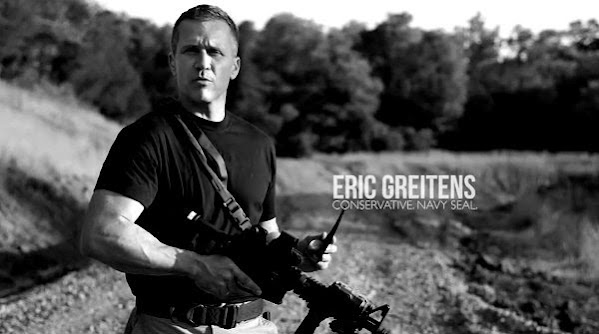 As of this writing . . . We check Eric Greitens' social media feeds and there hasn't been any mention of the Kansas City Police Department worker that's suffering an alleged "criminal investigation" for giving this controversial politico the time of day.

Of course . . . People participate in the discourse at their own risk and maybe sending a shout out might make the situation worse . . . But for a dude who claimed "I have their back" in support of KCPD . . . He's quickly moving on from a publicity stunt FAIL.

Meanwhile, here's a peek at the politico with his far more untouchable friends . . .

Donald Trump Jr. And Eric Greitens Have A Message For Liberals While Shooting Firearms

Guns and Gear [Screenshot/YouTube/Eric Greitens] Donald Trump Jr. and Republican Missouri Senate candidate Eric Greitens had a message for liberals while shooting firearms in a campaign video released Monday. WATCH: The video, titled "Striking fear into the hearts of liberals, RINOs, and the fake media," began with the two shooting the firearms at an outdoor gun range.

For Missouri Republicans, angst over Eric Greitens is about more than winning in the fall

Back in February, Eric Greitens stood before a scrum of reporters in Jefferson City after filing for the U.S. Senate. Roughly four years removed from resigning as governor , Greitens was banking on Missouri Republicans to revive his dormant political career.