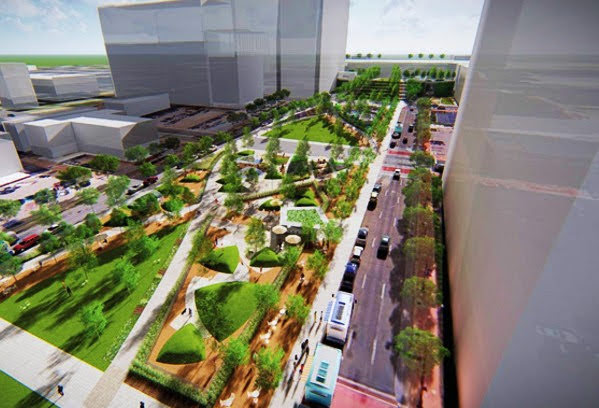 A "transit" and "green space" effort debuted today . . . A brief insight: It's probably never gonna happen and if it does, it's not going to live up to the hype.

Yes, yes . . . There is "funding" in place . . . But let's not forget that this "news" is coming from the same cowtown that has an unfinished flood control project near one of its most elite and iconic shopping district.

Either way . . . You'll forgive our skepticism and lack of excitement over yet another homeless park for downtown Kansas City . . .

Here's a peek at the plan hatched by many dudes wearing smart Dockers and glasses . . .

The 5.5 acre park will cover I-670 and stretch from Wyandotte Street on the west to Grand Boulevard on the East.

“Today is an exciting day in Kansas City as we announce significant progress made to build a lid over I-670 as part of our efforts to continue building our downtown corridor for residents, visitors, and businesses,” Mayor Quinton Lucas said.


Officials drawing up plans to create large park over I-670 in downtown Kansas City, Missouri

Officials on Friday announced funding plans to design and engineer a new park that will vastly change the landscape of downtown Kansas City, Missouri.The idea: Build a park and green space over Interstate 670 on the south side of the downtown loop.Officials including Missouri Sen. Roy Blunt and Rep.


After years of chatter, Kansas City will finally build a park over a stretch of I-670 downtown

Officials on Friday unveiled plans for a four-block-long deck and park over Interstate 670 in downtown Kansas City that promises to transform downtown and spark further development just south of the downtown loop.

KANSAS CITY, Mo. - Part of downtown and Interstate 670 will look at lot greener in the near future. Kansas City leaders and Missouri Sen. Roy Blunt announced plans Friday for a $160 million park that will be built over I-670, bridging downtown and the Crossroads District.

Special thanks to this hype article which offers even more reporting and convinces us that all of this hype might just be vaporware . . .

If realized, the project could boast such amenities as playgrounds, dog parks, and arts and amphitheater programming. The design process is expected to last between 12 and 18 months. State and federal partners have shown strong interest in funding construction.